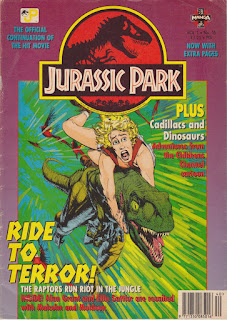 Another exciting cover from Michael Golden, right?  Shame it never happens inside then, in fact our scientific heroes don't even share a scene with any dinosaurs this month.  The reason behind the cover is simply editor Dick Hansom grabbing one from the US series which by now had had many more covers than our UK equivalent.  But while we may not get to see Dr. Ellie Satler atop Celia we still get an excellent strip inside. 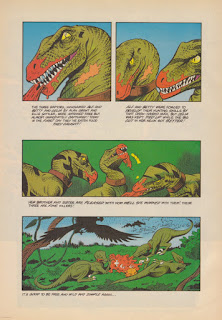 I love that final panel with the three of them just lying about in the sun, eating and enjoying life.  That caption that goes with it sums up perfectly how well the strip is at showing things from the perspective of the 'raptors.  The movies were always really good at showing us how intelligent they were and gave us an insight into their character and the comic runs with this.  I found myself really enjoying the time we as readers spend with them, though there always remained that sense of tension of course. 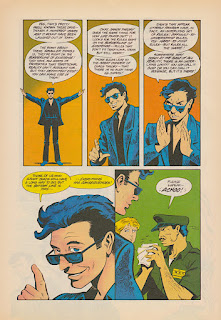 It's clear from how writer Steve Englehart writes for them that he's gone back to the original source material, Michael Crichton's novel.  It's not just in the depiction of the dinosaurs we see this though.  Just have a read of the page above with another of the little speeches from Ian Malcolm and if you've read the book it should instantly feel familiar.  These are always enjoyable and always read in the voice of Jeff Goldblum by the way.  It's the done thing.  It's with pages like this that the strip feels like a fully fledged sequel to the movie (which at the time it really was of course) with a further refinement to the film's depiction of Chaos Theory.

That last panel would prove important not only to the speech, but to the story too, as we soon see Dr. Alan Grant take a sneezing fit, followed shortly by one, two and then all three of the 'raptors! 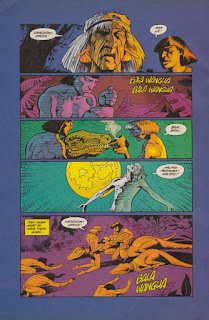 Extinct for millions of years and then kept on a small island miles away from the population at large, exposed to our modern world the three animals soon find themselves very ill and unsure what's happening to them.  After attempting, and ultimately failing, to hunt the velociraptors a local tribe watch them succumb to their illness, then start to worship them as gods of the past brought to life.  Bringing them medicine, idols of worship and dead animals as sacrifice, Celia is the last 'raptor with the strength to sniff them out and take the food to give to her sick siblings, before collapsing herself.  It then turns to the tribe to take care of their gods.

A long time passes and slowly the so-called gods return to health.  Eventually the tribe reappears to worship Alf, Betty and Celia and just as we think maybe they'd leave them in peace thanks to having their lives saved again, it all turns rather bloody. 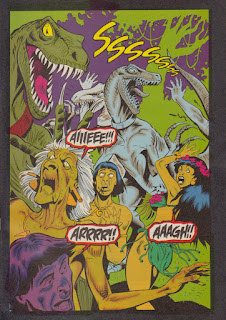 The majority of the strip this month focusses on the 'raptors, with our human friends restricted to basically one scene in the middle of the story where they regroup before deciding what to do next.  There's a sense of hopelessness here, a brilliant tense moment in the story where we see what could happen if these resurrected creatures were allowed to roam wild, with no way to stop them.  It really does paint a picture of humans having to learn to live side by side with dinosaurs again, which takes us neatly into the back up strip.

How's that for a link?

Xenozoic Tales continues under the guise of the Cartoon Network series on the contents page but the strip itself is unedited from its original printing in #4 of the self-published, independent comic.  But after reprinting strips from later issues it's a bit weird to now be going backwards, though I do have a theory about that.  But first, the story picks up from the one we had way back in #5 of Jurassic Park, so when reading this originally it was a bit strange Jack Tenrec and Hannah Dundee were only discovering the sniper's body now! 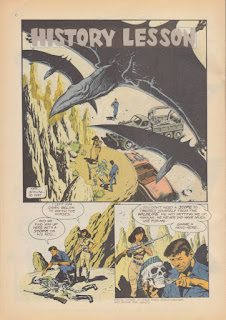 Hannah's previous encounters with the mysterious Grith and different little threads are brought together as she's taken to the vaults underneath the city where a library of books has been preserved for hundreds of years.  The people guarding it aren't happy about letting an outsider in to the books after they've just made some "startling discovery", which we don't get to know any more about this time.  It would all be an intriguing mystery if the 'Next Issue' banner didn't give it away somewhat by stating it'd contain "The Secret of the Cataclysm"!

With the Jurassic Park strip's own banner claiming next month would bring "The Thrilling Climax!" it's clear with hindsight the publisher knew the next issue would be the last, though as a teen I just thought it meant the end of the current story.  But anyway, it looks like the mystery of the cataclysm in Xenozoic Tales was deemed a suitable conclusion to the back up too.  We'll find out in a month I guess.

It's sad to think this journey is almost over.  While I've been covering the comic since June last year and a lot has happened since then in my life, it feels like no time at all since I picked up #1 and began that adaptation of the movie.  The next issue is indeed the last but it won't be the last you see of Jurassic Park on the blog.  You'll find out more when it returns on Sunday 3rd November.

PhilEdBoyce
Oink! introduced me to the world of comics back in the 80s so I decided to relive it issue-by-issue in real time, reviewing each issue on its original release date. Now I'm also going 'Beyond' Oink! with the other comics I dipped my toes into as a kid, again in real time.