Prepare for double the comics and double the length of my posts as those changes to The Transformers UK finally happen this month. Marvel UK shook things up at the end of the comic's first year with a new, weekly, full-colour comic with one main Transformers strip of around 11 pages and one back up of about five or six pages per issue. Sandwiched between them would be the letters page in most issues, the Transformation editorial on page two and Lew Stringer's cartoon near the back. It's how we all remember it, though I do hope everyone's enjoyed the look back over the quite different issues from year one.

But now, it's time to really launch into the world of these Cybertronians as it begins to open up and expand. This is one truly epic comic and after a full 12 months we're only just getting started.

#26: This has to be my favourite issue so far! With the comic changing formats next issue we were treated to a complete US strip, all 22 pages of it, so that the new look could start with a new story. Warrior School stars one of the more fleshed out of the robots (if that's not a contradiction) as Ratchet gets schooled when he goes up against none other than Megatron himself. The team of Johnson and Baker bring the best US art yet and it's such a shame they didn't stick with the series. That transformation page is a particular highlight.

There's a lot happening, beginning with Ratchet having to rethink his very existence. He was created as a medic, that's what his programming is, so to suddenly find himself having to stand up and fight is tough for the character. This internal struggle is brilliantly portrayed. On top of that Buster Witwicky is beginning to have strange visions and experiences thanks to the Creation Matrix currently residing in his brain. This definitely reminds me of Revenge of the Fallen and Sam Witwicky's very similar struggle with the Matrix. Finally, the story also shows Josie Beller starting her own journey to becoming Circuit Breaker.

Certainly the theme is character transformation which is very apt. There's even plenty of examples of the Transformers actually using their disguises to infiltrate us, which would become very rare down the line and which the cartoon dropped almost straight away. What an issue!

Anyone who collected Marvel UK comics will remember these Classifieds pages and then we have the hype for the new look weekly comic to come. Strangely, while this issue is seen as the last fortnightly it'd only be a week until the next issue and even the dates on the front only cover seven days. With the likes of Oink! and even Marvel UK's own The Real Ghostbusters their "first weekly" issues were those which started the weekly schedule, whereas with The Transformers it was the first issue to be out only a week after the previous one. It's strange and for me this means #26 is really the first weekly.

Oh well, it doesn't actually matter, the important thing is it's about to transform into what we all remember so fondly and I'm going to be reading double the amount of comics!

COMMENTS HIGHLIGHTS:
@stealexandertoys - "An advert for Nostalgia Comics in a nostalgic comic. Nothing was ever so perfect!"

#27: For The Transformers UK's first birthday the comic was now officially weekly and in full colour for the first time since #1. It dropped the amount of pages to 24 but fans didn't care; there were no more pointless fillers, it was packed with everything they loved and they'd get their fix every single Saturday. I have to say it does look rather lush in full colour.

Johnson and Baker are back and the art is superb as Ratchet explores the Savage Land for the bodies of the Dinobots. This story would see their actual introduction to the comic after only featuring in a flashback previously and we finally get to see what happened millions of years ago when they were created by The Ark, a mystery we've been waiting to be resolved since #7. More lovely transformations in this story too, these artists are just the best at these.

In the back up slot Machine Man has been replaced with... himself. The Machine Man of 2020 story begins with our reluctant hero discovered dismantled in a junk yard. He'll get a fresh lick of paint as the story develops but for now it really is a superb set up tale. He found it difficult to fit in before as a futuristic robot, but now he's out of date! It'll be interesting to see how the character develops from here.

Finally, Hasbro had eventually got around to fixing the colouring errors in their own adverts. The issue as a whole is a great start to the new look and it's a format which would more or less remain for almost 200 issues!

COMMENTS HIGHLIGHTS:
@the-_inevitable.k - "Used to buy it every week before school and read it before the bus had arrived. 🙂 We were so lucky getting Machine Man 2020 as back up. I bet it's not as widely remembered in America as it is here."
@gazmondo595 - "You know, I really didn't like Machine Man when I read it in the 80s. I was so glad when it finished and they did the Sinister Six story. I'd really like to read it again though!"
@theoinkblog - "I do prefer the 2020 storylines but there's something very likeable about the original MM character himself and I've really enjoyed reading these strips."
@philelzebub - "This was the first issue I picked up, back in the day. 😁"

#28: Each of the individual Dinobots gets a full and proper introduction this week, including getting the cover treatment for the first time, even if it's not Bright's best but I'm sure it got young readers excited. They were already fan favourites though, so they needed a big story and a ferocious battle that could live up to the hype. How about pitching them against Decepticon leader Megatron in a bit of Autobot deception by Ratchet? That'll do. This also sets in motion a chain of events for the Decepticons and. Shockwave because Megatron would be lost in that snow for months.

Josie Beller also continues her own transformation and we're beginning to see how the likeable, intelligent programmer is slowly being taken over by hatred and bigotry. It's a particularly dark piece of character development when read today. The end of the story had its final few panels removed to keep it in line with the UK's continuity, replaced here with a Fact File on Snarl to round off this Dinobots special. 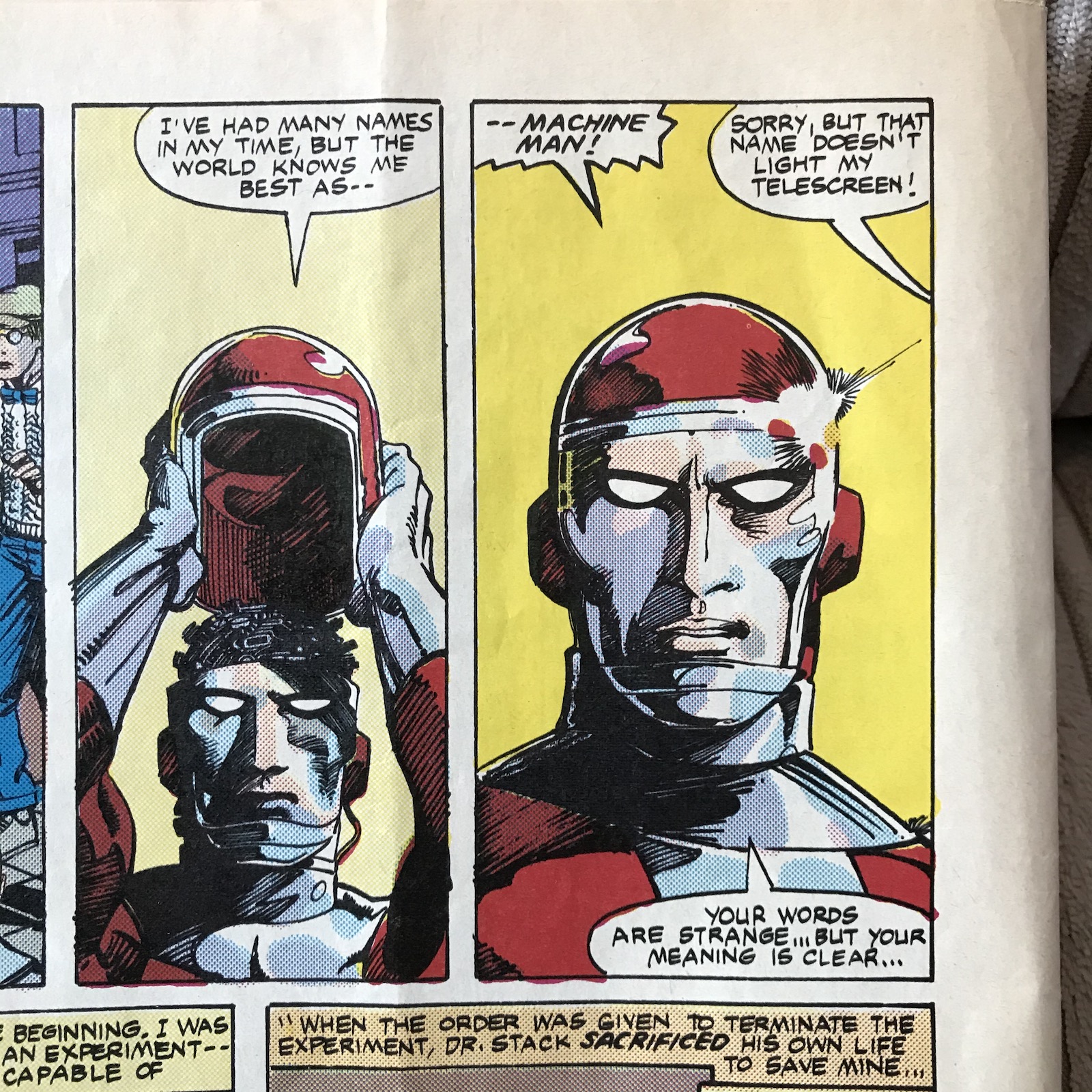 Our old friend Machine Man also gets to try out his new look in the year 2020 for the first time and it suits him, don't you think? Despite a whole new creative team he definitely still feels like the old Aaron Stack I'd come to know and love over the course of the previous year.

#29: Hmm, the strip action above might seem a tad familiar to anyone who watched the cartoon series as a kid and that's because it's a complete rip-off of the second episode, here unofficially adapted by Simon Furman with no credit given to the writer of the episode. It's told by Ratchet to the Dinobots to fit it into the continuity but the idea just feels rushed, like they suddenly had a couple of issues to fill because of the move to a weekly release schedule.

But that doesn't take away from the lovely art and in particular Steve Whitaker's simply gorgeous colours. It looks so, so much better than its animated inspiration but I do think it's a bit cheeky of Soundwave on his letters page to state the cartoon bases its tales on the comic! The two mediums would have completely different stories, each going off in their own direction and the comic's was vastly superior, but coming out with that straight after this particular story is a bit off.

There's more stunning artwork in this month's calendar from the talent that is Richard Fisher. I thought it looked familiar and I've finally put my finger on it but we'll get back to that further down the line. Much, much further down the line. Finally for this month we've also got a quick advert for another Marvel UK comic as Captain Britain Monthly gives away a free poster.

COMMENTS HIGHLIGHTS:
@judahbensheriff - "I remember buying this with my pocket money! Great memories."

It all feels so comfortingly familiar now and I couldn't be happier. I've got some foggy memories of the basic plots to some of the bigger events that occur during the run now that we're into the weeklies, but I couldn't tell you more than that. That's the way I like it, I want to discover all of these characters and stories all over again as intended, in real time one issue a week instead of bingeing. As I've said before, it keeps the epic stories epic and the cliffhangers dramatic. Things have just picked up a gear.