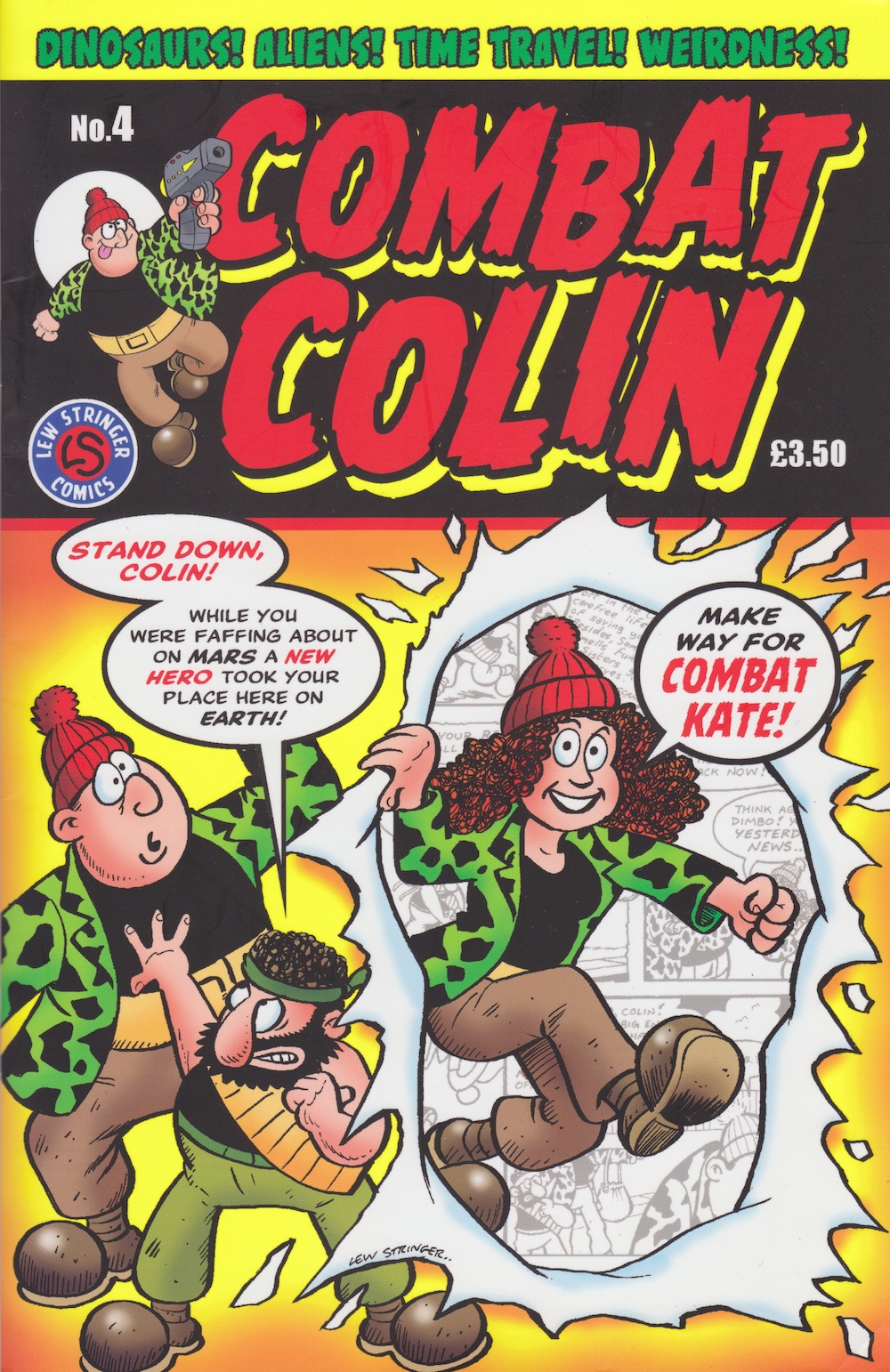 Combat Colin and Semi-Automatic Steve are back!  In this, the fourth edition of classic reprints of Lew Stringer's long-running humour strip the bumbling duo come up against many fondly remembered villains such as Mega-Brain, Ragdoll, series favourite Professor Madprof and even Doctor Doom!  Well, Doctor Doomy to be precise.  The best new arrival however is Combat Kate, who even makes it onto the brand new cover above.  At the conclusion to #3 Colin had just saved the universe from disaster on Mars (somehow!) and upon his return to Earth he's rightfully expecting a hero's welcome.  He's set to be very disappointed.  Colin's return and Kate's introduction make for the perfect jumping on point for the new issue and you can read the strip below. 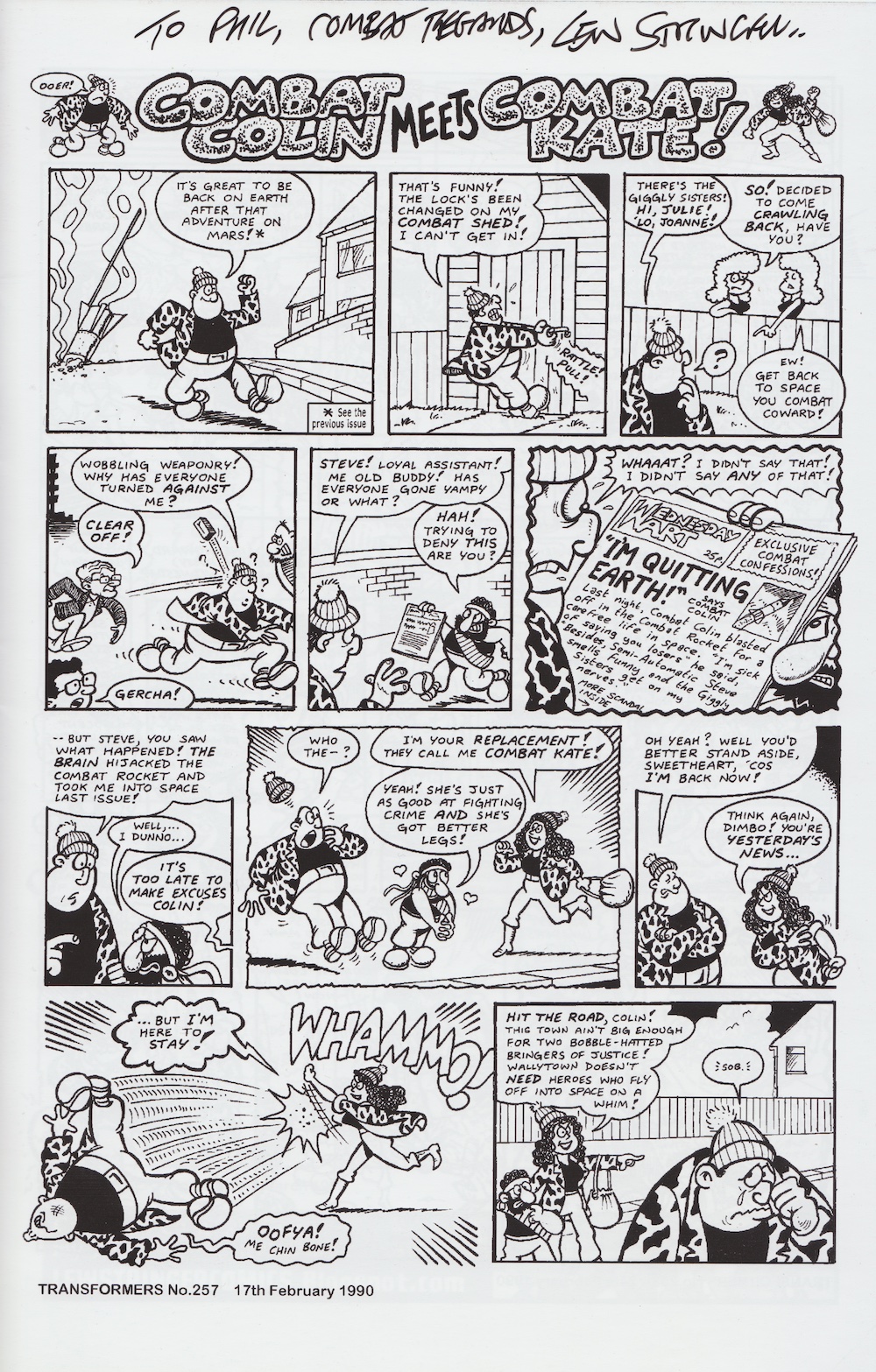 The timing of the issue itself with Kate is perfect (this was released a few months back, apologies for the delay pig pals!) as Lew takes a very funny swipe at certain corners of particular fandoms out there with his opening editorial.  Beginning with, "Combat Colin replaced by a woman!?!  It's political correctness gone mad.  A feminist agenda calculated to blah, blah, blah...".  You'll know instantly what he's poking fun at and I really appreciated the joke, given some of the brilliant movies and TV shows that have irked some dark corners of the web.

The strip above is a very funny start to the proceedings I'm sure you can agree and it only gets better from there.  Over three pages (or three weeks in the original comic) Kate goes from goodie to baddie and back again and that's a good indicator of the pace of Lew's strips throughout.  So much happens per page, sometimes per panel, that it's a breathless laugh-a-minute ride from beginning to end.  32 pages in total on great quality paper, card covers and one or two extras, it's a bargain for the same price as previous issues, just £3.50 plus postage.  The strips themselves are taken from #257 (February 1990) to #283 (August 1990) of Marvel UK's Transformers and Lew promises at least two more issues to round things off, with the potential of more after that.

But anyway, did I really say "Doctor Doomy"? 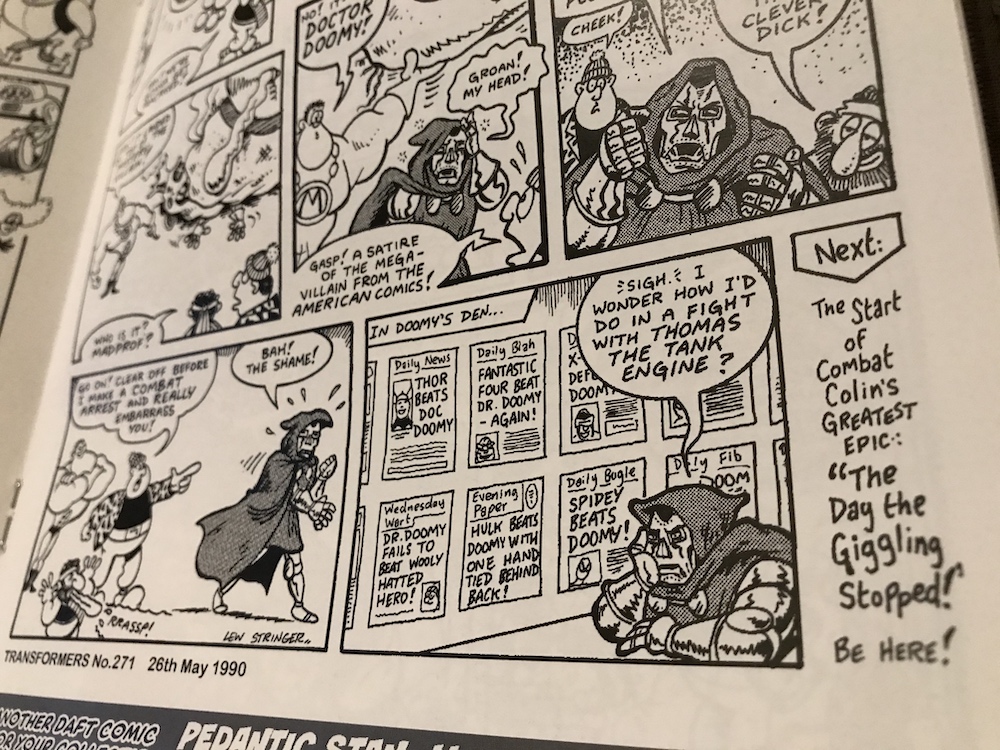 Yes, that's right, the evil mastermind of Marvel's own superheroes comics range makes a surprise guest appearance in this issue.  I just love Colin's initial reaction upon seeing him, a typically long-winded statement to convey sudden surprise, the likes of which we'd have got in actual superhero comics of the time.  The issue is full of such surprises, not cameos as such but left-field contraptions appearing from Colin's trousers (fans will know what I mean, despite what that sounds like), completely random plot twists, out-there stories and beware, anything can and will be the subject of a good ol' pun.  It might sound clichéd and over-the-top to say it, but you literally never have a clue what's coming on the next page and that makes for compulsive reading and a potentially sore stomach from laughing.

This is what it was like from week to week for Transformers UK fans, you never quite knew what was going to be on that Combat Colin page and it was obvious Lew was relishing the complete control he had.  He's said in recent years while releasing these collections how he was really enjoying his time with the character by this stage, mainly because he was finally able to create multipart serials, something he'd wanted to do for quite some time.

Something else he loved to bring us were one-off specials, such as these hand puppets below, cleverly wrapped up in a spoof of those space fillers other comics would produce out of necessity at times.  Here though, it's a planned gag. 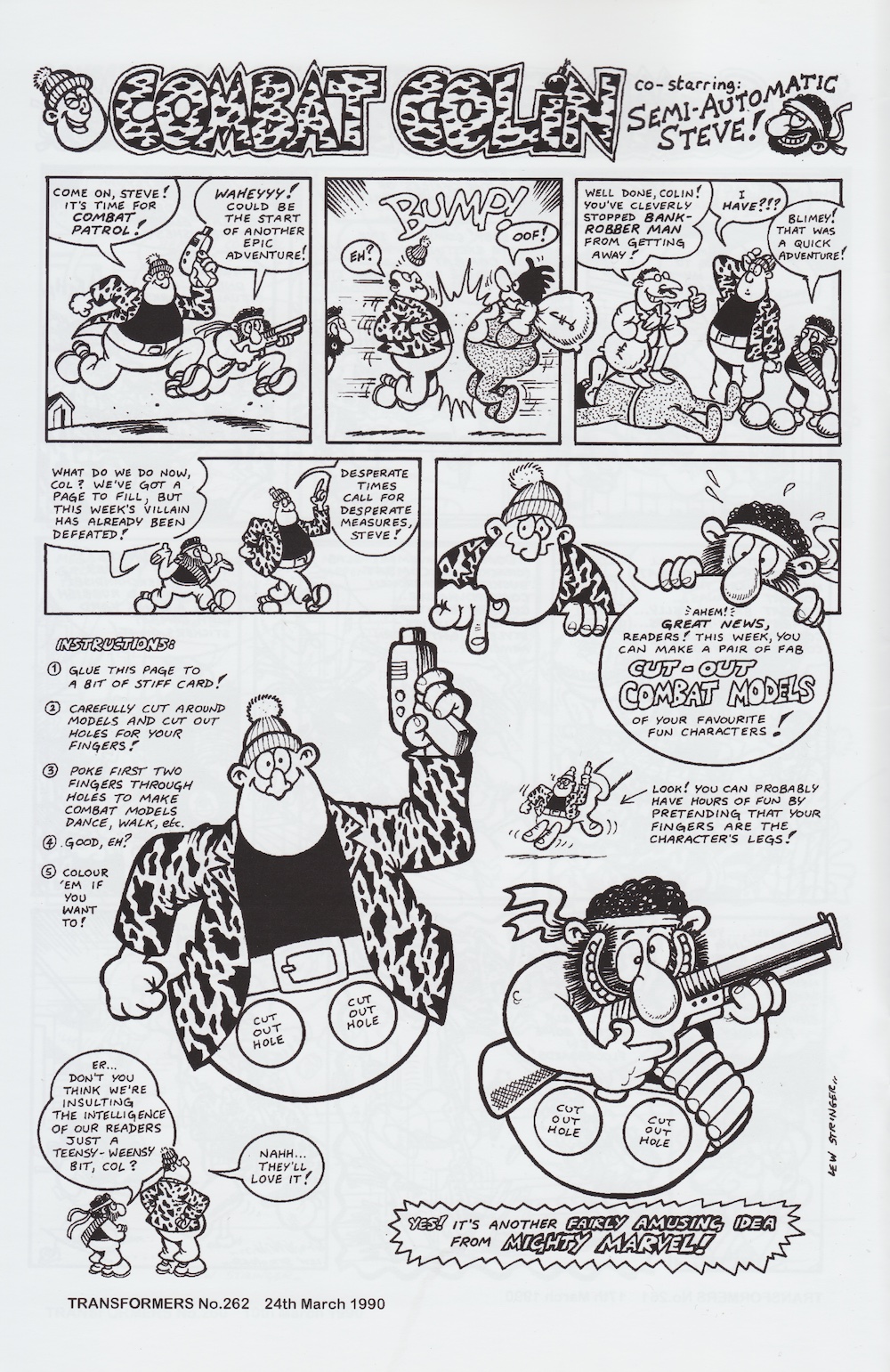 The biggest serial of all is right here in this issue too and it's certainly the strangest of the lot.  Lew does strange so perfectly, it must be said.  What begins as a series of weird hallucinations (see below, with another The Prisoner reference for good measure) in The Day the Giggling Stopped leads our intrepid duo and their girlfriends Julie Giggly and Joanne Giggly back to Mars for a sequel to the aforementioned climax to #3 and then back into the past for a prehistoric adventure where they do battle against a laughing Tyrannosaurus rex. Told you it was strange. Altogether it takes up a whopping ten pages, which was over two months in the Transformers era and it's a classic comedy strip if ever there was one. 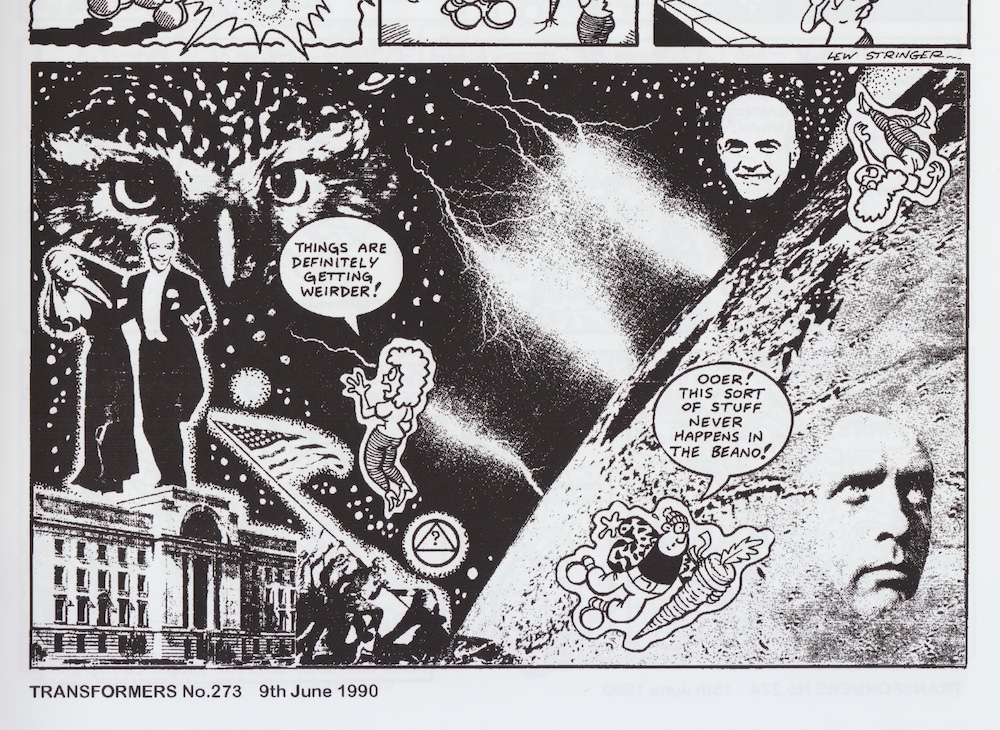 It's the perfect finale to the comic, which is then nicely rounded off with a quick feature about another of young Lew's influences, TV Century 21, complete with a photo of the young man back in 1965 proudly showing off the latest issue.  From reading about the Daleks to drawing them for Doctor Who Magazine 50 years later it's a nice, personal glimpse into the comic and a fitting way to end the issue. 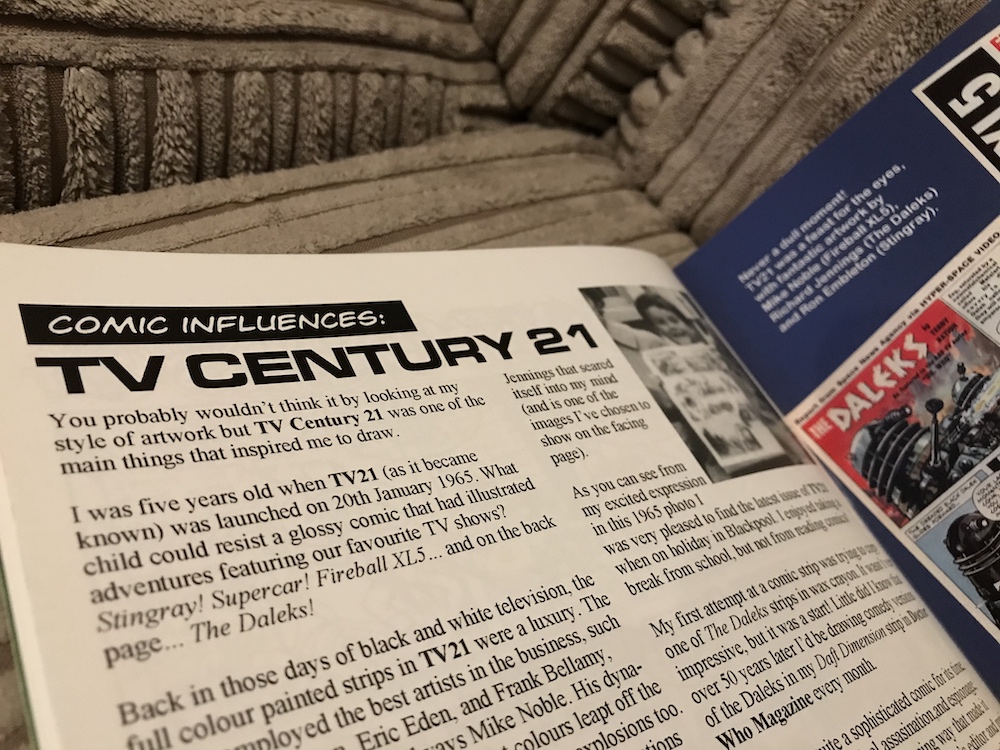 If you're a fan of Lew's this is the perfect Christmas stocking filler to hint at with your loved ones and if you were a fan of Colin himself it's nothing short of essential.  It's available for £3.50 plus postage at Lew's online store and, while you don't have to buy the previous issues to enjoy it to its full, you can buy all the previous adventures in the series separately or as part of specially priced bundles.  So hop along there now for some festive frivolities.