During Christmas 2015 I wrote up a rather lengthy post about my observations of the UK comics industry and how, contrary to some people's 'alternative facts', it was very much alive and enjoying success as it continued to evolve in the modern world.  It may be a completely different beast compared to what many of us grew up with, but that could be said of our own childhood comics compared to those our parents may have read.  Just as the music industry has changed so much, just as the TV industry is changing, so too are comics.  Just as I said at the time the UK industry is leading the way and I'm very happy to see this still being reported in the wider comics press.

All the proof you need is right there in the world of new graphic novels, new digital comics, new small press titles... new, new, new...  The tired old arguments apparently still pop up, devoid of any facts and still pushing the excuse that just because it's different than the comics industry of old that must mean it's dead.  By that regard so are the music and TV industries.  Foolish, isn't it?  But they're in the minority and you can read exactly how I feel by clicking here to read that old post, which I was thrilled to see shared on large comics sites and social media at the time.  But back to the present and the reason for this post.

Now it's the turn of Broken Frontier, the superb comics news site established way back in 2002, packed to the brim with writers from across the world with a particular desire to read and enjoy independent and creator-owned titles.  Andy Oliver is one such contributor and has written a piece on the British comics industry, using appropriate terminology in the headline which should strike a chord with fans of a certain British TV show: 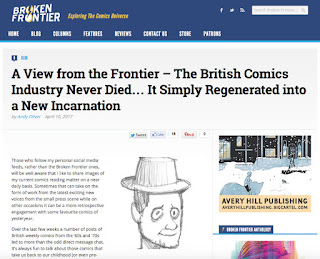 Expertly put and an interesting read, click on the picture above or right here to go and read Andy's article, then go and check out Oink! writer and cartoonist Lew Stringer's take on this on his Blimey! blog too.  Both pieces do a superb job of summing up the modern UK industry, how exciting it is, the vast volume available out there now and how much is constantly being crafted.

One word of warning though, you may want to hide your credit card/debit card/Apple Pay app or whatever you use to buy your comics before clicking on the links above.  This could get expensive!

Thanks for the link to my blog article, Phil. I agree with your views here of course and I'm glad you've posted this article. There's still the mindset that only thinks of newsagents as the place to find comics, so articles like this are essential to educate the public into seeing the bigger picture.

Good comparison to the music and television industries. I know a few who don't consider digital comics to be "real" comics, but that's as daft as a record collector saying MP3s are not real music, or that programmes watched on Netflix are not real TV shows.

Although I'm betting that some stick-in-the-muds in music / TV circles do hold those views. It's inevitable.

Meanwhile, genuine fans like yourself will keep spreading the word to help the comics industry reach more people, not kicking it because it doesn't fit certain outdated narrow parameters. Good work, Phil!

Thanks for the kind words, Lew. Evidence is all around us. Yes, the newsagents have smaller pure comics sections these days and bigger sections for comics-magazines, but movie rental stores are no more, DVD and music stores have dwindled in number and ratings on the main TV channels aren't what they used to be. Does this mean the TV and film industries in this country is dead? Ha!

Of course not, we just have new and different (and many more) avenues to watch them on now, with dedicated movie channels, streaming services like Netflix and Amazon Prime, cheap online stores to buy the discs, and iTunes to buy or rent digital copies from the comfort of home. The same idea applies to comics the world over and that article sums it up nicely; comics are evolving too and the British industry is surging ahead!

Really looking forward to the Enniskillen Comic Con, even though that big day MUST be a "con" since there's going to be nothing there if there's no industry ;)