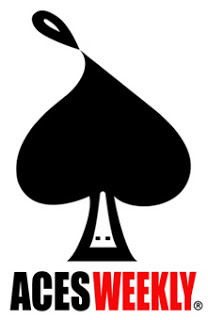 Yes she's back again!  The temperamental and ever-so-maniacal little old lady that Oink!'s pig pals all adored and the rest of the public feared has returned to the digital pages of Aces Weekly once more.  Well actually twice more.

Brought back to life irregularly by her creator David Leach, Psycho Gran was a fan-favourite amongst Oink! readers and she's still proving as popular today.  Last year David launched the first issue of her own comic and you can read all about it by clicking here and order it up by doing the same to its cover image on the left-hand side of this very page under 'Madvertisements'.

Earlier this year she also popped up in Aces Weekly to show a wayward cyclist a thing or two and again it was covered here on the blog.  David is still planning his second issue of her own title to be a collection of the strips from this weekly anthology of humour, action and sci-fi but you'd be a fool not to take a look now!:

Aces Weekly is released every seven days and you subscribe to a seven-issue volume at a time, before it takes a rest for a week before popping right back up again with another seven weeks of thirty pages of the very best in British comics entertainment.  That's a whopping amount of comics for the measly sum of £6.99 for the whole volume!  Also each previous volume is ready and waiting to be purchased for the same price on their site.  Around 200 pages for less than seven pounds including top Oink! talent such as David, Lew Stringer and more?  Bargain: