BRICKMAN RETURNS - AS DOES LEW STRINGER! 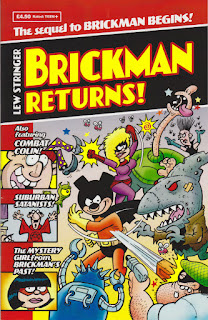 None other than Pete and his Pimple and Tom Thug creator Lew Stringer has just released Brickman Returns!, a small press comic collecting together twenty superb full-page strips of his longest-running character Loose Brayne and his daft alter-ego.  Originally created in a 1970s fanzine he's returned time-and-again across various titles and this second volume reprints his adventures from the pages of Image Comics' Elephantmen! title.  But there's also a couple of other characters included which will please fans of Lew's work no end but we'll get to them in a second, first here's the opening strip from the main story which acts as the perfect introduction to anyone who hasn't read his previous stories: 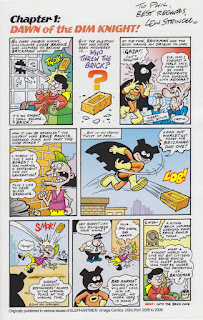 Thanks Lew for signing this by the way!  Didn't expect that!

The first thing that strikes you about the comic is the superb finish it has.  It feels a lot bigger than its 32-page length, with lovely thick, glossy pages and a thin cardboard cover displaying that excellent cover, it's of an extremely high quality print, especially when you consider the great value price.  Inside the story rattles on with one-page chapters from each of the Elephantman! issues and it never fails to surprise you.  With Lew's imagination not only is anything possible, it's included!

The strips have Brickman teaming up with Tina Trowel as his crime-fighting partner (and more) and there's a whole host of superbly written baddies such as The Poker and The Ostrich, with one ludicrous scheme after another.  On its surface it's a Batman parody but in reality it has its own identity, as Lew explains:

"Although Brickman was a parody of Batman, I didn't want it to be too in-jokey.  The idea was to appeal to the general public ... so I only stuck to spoofing the basics of Batman."  He also points out how morally ambiguous the character is and it's through this we get some of the best moments in the comic.  He often makes decisions based on his own interests rather than the public he's meant to be protecting, which may sound like a simple idea but it's a great device for a supposed superhero and Lew takes this and runs with it.  But let's not forget the slapstick and some brilliantly judged in-jokes about superhero characters and comics fans.

There are plenty of genuine laugh-out-loud moments in what is a truly nutty comic and one such moment in particular I roared at but I'd be spoiling your enjoyment of it if I told you about it.  All I'll say is it's Chapter 14.  Now go and buy it to see what I mean.

When you've finished the main story you've also got the extra feature mentioned above, three pages of a Combat Colin strip from Transformers (spot the cameo, pig pals) and a collection of mini-strips from his other creation, the Suburban Satanists who were created for a Norwegian comic and make their first honest-to-gosh UK (and English) appearance right here with a collection of their outings: 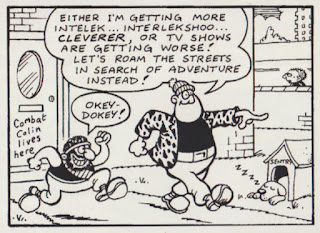 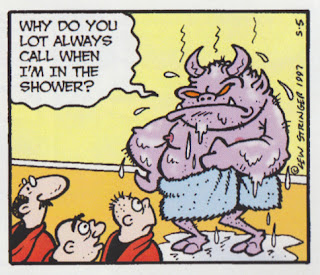 This is a great comic to enjoy for another reason - the Lewniverse, which Lew affectionately calls his own little universe where all his creations from across the many titles he's worked on can interact with each other.  It makes for a solid world in the Brickman stories in particular, adding a depth to the ludicrous (or is that Lewdicrous?) frolics of the brilliantly defined characters.  It has you analysing every panel and re-reading the comic for all the little references and background details for every last giggle.

For fans of Lew's Oink! work I can't recommend this highly enough and it's available through his shop for a paltry £6.00 which includes first-class postage in a sturdy, protective package:

Also available is the original collection of Brickman strips from 1979 to 1996 in the digest-sized 152-page(!) trade paperback Brickman Begins! which contains loads of strips and features, including contributions from some top cartoonists in the UK comics industry.  You can even pick both up at once for the special offer price of £13.00.  It'd be almost rude not to at that price.

While Lew does say this is the final swan song for the character he's also said that before, so here's hoping some time in the not-too-distant future we'll all get another invite to Guffon City.