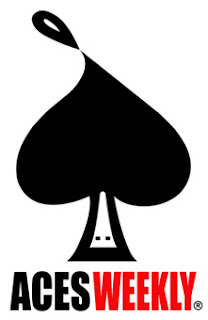 Yes that's right, along with her own comic book series (more news on that below too!) that psychotic little old lady is also popping up with brand new material in the digital comic, Aces Weekly.  Never heard of it?  Well let me introduce you two...

Each 30-page issue comes to you direct to whatever digital device you choose, whether that's your desktop computer, a Retina Display iPad (I mention it because it just looks sublime on that display), smart TV, or phone if you're feeling especially cruel to your eyes today.  As the title would suggest it's also weekly, so who said British comics were dead?  This weekly format lasts for seven issues at a time, which completes a whole volume of stories and then it takes a fortnight's break before launching back with the next volume and another raft of great comics from some truly amazing talent.

Oink!'s very own Lew Stringer and guest artist from #64, John McCrea, are amongst those contributors, the former resurrecting his Action Force and then Transformers Marvel UK humour strip, Combat Colin.  As if that's not exciting enough for the kid in me, David Leach has brought back Psycho Gran too!  There's just no keeping this little lady in retirement is there? 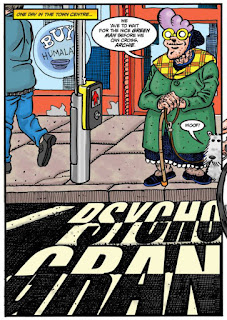 It all starts innocently enough but it doesn't take long before a manic cyclist decides to pick on what he perceives as a soft target.  He couldn't be more wrong, in more ways than one!  I'm obviously not going to ruin it for you but needless to say this five-page strip is an instant classic - it's probably one of my all-time favourite Psycho Gran strips - and with Aces Weekly being so cheap anyway it's a bargain just to get some brand new material for this wonderful lady (and for Colin of course), never mind the huge amount of other content available.

So how do you go about buying it and seeing what happens next?  Simple, just go to acesweekly.co.uk where you can subscribe to all seven issues of the current volume for a paltry £6.99 (€7.99) and every week you'll receive a brand new issue direct to your device.  That's 210 pages for that amount which also includes extras, original art sketches, scripts and more.  You can also buy all the issues in previous volumes all at once for the same price in special bundles on their site.

Psycho Gran appears irregularly and David shall be pulling together all her adventures from Aces Weekly into the second issue of her own comic which will be out by the end of the year.  "Second issue?"  Where have you been?  Click here for the post from when her first issue came out last year and down the left of this screen you'll see a picture you can click on to take you to Comixology's site to buy it for yourself.  Another bargain of over twenty pages of dedicated Psycho goodness for only £1.49.

David's full-colour artwork is sublime throughout both the first issue and this new strip - really, it's that good!  Pick up a copy of either to see what I mean and in particular this Aces Weekly one has a full-panel near the end which is just hilarious even on its own.

Oink! lives on in the pages of this superb anthology of humour, action, science-fiction and more and for anyone who grew up on the comics from around this time you'll see a great selection of names you may remember.  Two I spotted were Phil Elliott and Bambos, but where from you may ask?  Well that'll be answered in the second part of Beyond Oink! this coming Wednesday.  Aren't I a tease?