<< GO TO BEYOND OINK! BLOG SECTION 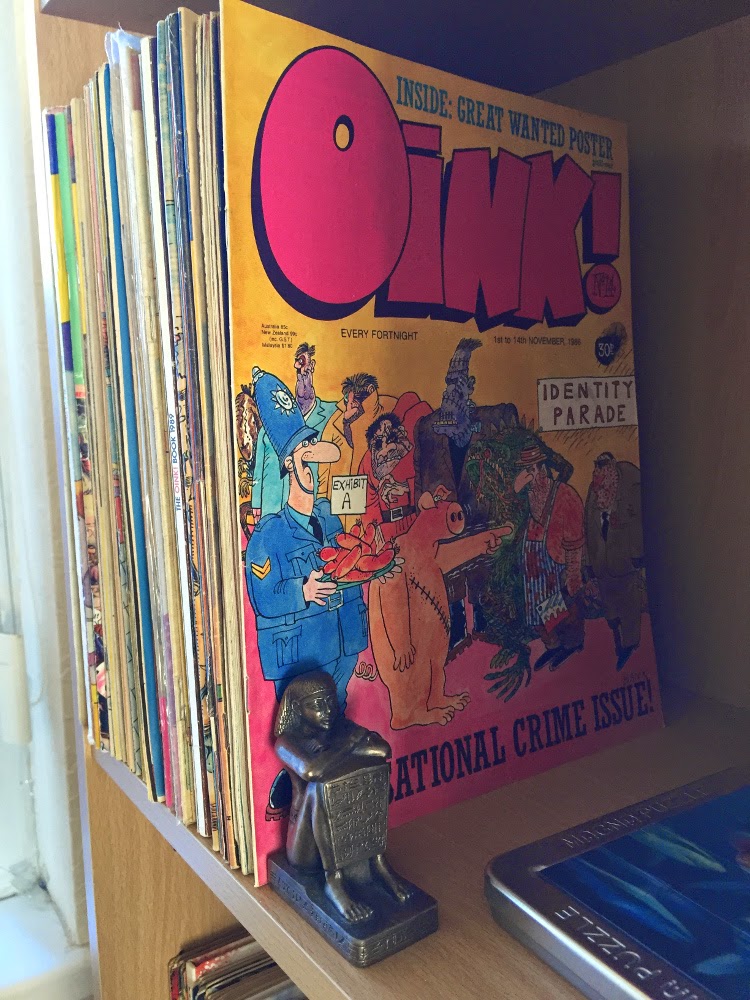 Oink! is not only my favourite comic, it was also my first.

Before it came along I still loved to read, mainly The Railway Series by The Rev. W. Awdry which I had a big collection of amongst my other children's books, but I hadn't collected any comics.

Not that I was a stranger to them.  My brother got The Beano every week and every Christmas Santa would bring my brother and I the annuals of it and its companion The Dandy.  He also collected Roy of the Rovers (though I'd no interest in football so never read it) and one of my sisters would buy Look-In which was a kid's version of TV Times, focussing on the programmes the younger viewers would like.  It contained some strips and I'd read and enjoy the Knight Rider ones mainly.  I also knew of some friends who were into their Transformers comics in a big way.

I was more of a partwork reader as far as regular publications go, with Story Teller and Story Teller 2 being top quality story magazines and cassettes, the tales told by some top talent such as Tim Curry, Bernard Cribbens, Brian Blessed and many more.  We really had the best reading material as children in my view, after all for many of us it was our number one activity.  These led on to Discovery and Quest which brought history and science to children in an enjoyable fashion too:


But Oink! brought something different to my life - the world of comics.  Ongoing fun in a fortnightly package and the newsagent's shop was jam-packed full of them.  Compared to today's selection for children, my local shop had three shelves running the length of the whole store all filled with comics of every genre.  What's more, they were full of reading content rather than filler and free gifts were a rarity.  They were also genuine 'free gifts' rather than cheap tat making up most of the cover price like today.

From the age of eight when I started with #14 of our porky publication, right through to my late teens I bought so, so many comics from that shop.  A lot of these were random issues rather than collecting individual titles because when I got my pocket money I just had to go and buy comics to read!  The odd issue of titles such as The Punisher, Marvel's Bumper Comic, Whizzer & Chips, Super Naturals, Death's Head, The Sleeze Brothers, Visionaries.. and these are just the ones that popped into my head right now.

But there were a dozen titles I collected religiously as a child.  Ones which would be placed in the 'B' box behind the counter in Mr & Mrs Clark's shop, filed under 'B45 Boyce' and which wouldn't be kept there for very long before a young boy ran in to pick them up.

Over the next while I'm going to be taking a fortnightly (for the most part) look back on these eleven other comics titles published between 1987 and 1994 that grabbed my attention.  Some were a lot more successful than others, for example my two particular favourites lasted only six and sixteen issues each!  But what were they?


You'll have to come back in a fortnight's time on Wednesday 10th June to start finding out!

Email ThisBlogThis!Share to TwitterShare to FacebookShare to Pinterest
Labels: Beyond Oink!

Ah, another Storyteller fan! That was such a great magazine -- multimedia before it was cool. Also pls keep us updated on your Oink book. :)

Yey!! Another member of the cool 'Teller club! I loved those mags and have very strong memories of them, especially the Christmas ones.

I think Storyteller got me into comics in the first place...

Oops, think my previous comment disappeared. Anyway: Storyteller got me into comics to begin with. Here's one of my scribbles:

Didn't know you had a blog and were drawing your own comics Carol!

Yep - I learned a lot from Oink, Scream and Storyteller. Have a look if you like and tell me what you think?