READ ON GET ON

When I was a child I discovered the world of comics through the very one this blog is based on.  That was when I was a mere 8 years old.  From there the world of these weekly, fortnightly and monthly treats opened up to me and the list of titles I collected from that age right up through my teens covered a wide variety of tastes.  At one point or another each of these were regular reads:

I'm sure there were others, random issues here and there, but these were the ones I never missed an issue of once I began.  My parents, particularly my mum, would tut when a title went up 5p or turned weekly from fortnightly, but really they never complained about the load of comics that began to pile up around the house.

The reason was simple.

While I did have some Railway Series books and other children's titles beforehand which I enjoyed greatly, Oink! was a key reason why I fell in love with reading so much as a child, and I truly believe my love of comics back then lead on to that love of reading developing as it did as a teen and as an adult.

But, back in September this year it was truly shocking to read the following news story from the BBC, which highlighted the literacy levels of 11-year old children in the UK, with Northern Ireland coming off particularly poorly.  In case you're not aware, this blog's writer is based in Northern Ireland so it hit home with me somewhat:

At the same time on Facebook some of the Oink! team were discussing the lack of decent comics out there at the moment for today's children.  Asides from The Beano and Toxic there's not an awful lot out there for this age range, with most comics now consisting of as little reading material as possible and a cheap, tacky toy shoved in a plastic bag.  This is so unlike back in the 1980s when I was growing up, when we'd a treasure trove of titles to choose from and each one was packed from front to back with plenty to read.  No stupid toys making up most of the retail price, no filler material of lame colouring-in pages, "mini-posters" (lazy screen grabs from a movie) or huge over-the-top fonts which amount to a couple of seconds worth of reading per page.

It's another reason why it's so heartwarming to hear of children (sons and daughters of Oink!'s pig pals) discovering this blog and enjoying the comic scans so much.

A friend of mine, Corrine, works at Save the Children and they're determined to do something about this.  I feel very strongly about kids having good quality reading material and the report they've produced details the huge difference this can make in a child's life.  Libraries are closing (the local one in Whitehead here is facing huge cutbacks and possible closure), too many parents are shoving mobile games in front of their children, or just turning the TV or internet on, and the comic shelves are a hopeless pile of gimmicks and merchandising tied into the latest blockbuster movie.

(Don't get me wrong, some videogames and television shows are indeed very educational and studies have shown how they can help.  But not when those forms of entertainment aren't carefully chosen and instead the first thing that comes to hand is that evening's electronic babysitter.)

We need to get kids reading again and you can help.  Below is a link to the Save the Children website and the page detailing their Read On Get On campaign.  As they say, even ten minutes a day can make a huge difference and it's time we helped.  There's a petition to sign to tell our politicians this is something we need to work on, and details of how you can volunteer too, to help out those disadvantaged families who don't have easy access to suitable reading material:

Save the Children are also touring!  This is where another reason comes into play as to why I'm posting about this here: 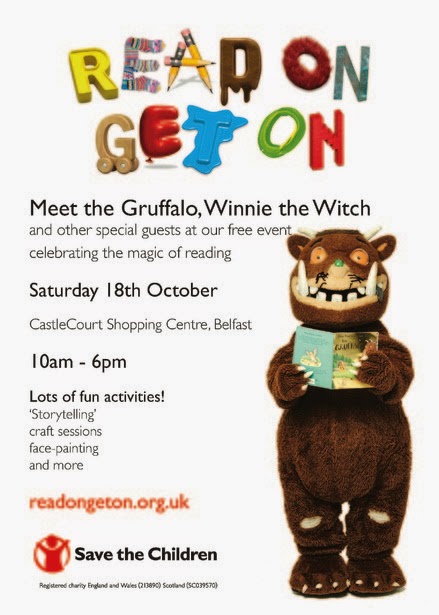 Corrine and her team will be at Castlecourt in the heart of Belfast this Saturday to promote this worthy campaign and it's absolutely free!  Come on, you'll get to meet the Gruffalo!!  I'm sure that's enough reason for a lot of adults to go, never mind the kids!

Behind this great event there's a serious message here and one which I feel is important to get out there.  So if you can make it to Belfast go along and bring your children for a great day out, and there are plenty of places to buy a few books on your way home for the young 'uns afterwards if they're feeling so inspired.

If you can't make it to Belfast, check out the Save the Children website above for information of where else the tour is heading, sign the petition, volunteer, or just help spread the word through all those social media thingies you all use.

One read of the report, or even just the BBC story above, should be inspiration enough.  It's time to help the children of today get on in life... by reading.

I only read comics and Enid Blyton books But Dad used to read Just William with me etc..
so agree the 80's had some good comics to read..and very important...Nursery comics were also soo much better. I agree with what you say.
Annuals are so lazy with only one original story like Rupert and all the rest reprints..such a shame..

I loved the annual gift of the ... erm.. annuals every year. But it wasn't long after this time that reprints started to appear. The second Oink! annual had them and then even the Transformers were all reprinted strips, and new text stories. Such a shame, but Oink! did appear not long before the big decline in the British comics industry.

One thing that was so good about Oink was the way it would have an obscure word, and underneath it, "Look it up, thicko!" to make us do our own research.

Does anyone else remember Storyteller magazine from the 80s? Another great way to get kids into reading.

Yes! My parents very generously bought StoryTeller for me, and StoryTeller 2 the following year. I never appreciated it at the time, but remembering back there was some real star-power talent reading those stories to us! A fantastic collection and I loved every single one. I can remember getting the special Christmas ones on my birthday too. They were an extra-special treat! Ah the memories....

Yes, Joanna Lumley read the ones about the cat didn't she? I can remember being scared (but loving it!) with the Minotaur story too, complete with its sound effects etc. And that Story Teller theme music, it's in my head now, clear as a bell!

Aha, yes! I can distinctly remember how that cat looked and its stories, as well as The Stone Soup one, the minotaur, the Harlequin one... Oh I must look these up!