Originally due on the blog on Friday 21st February. 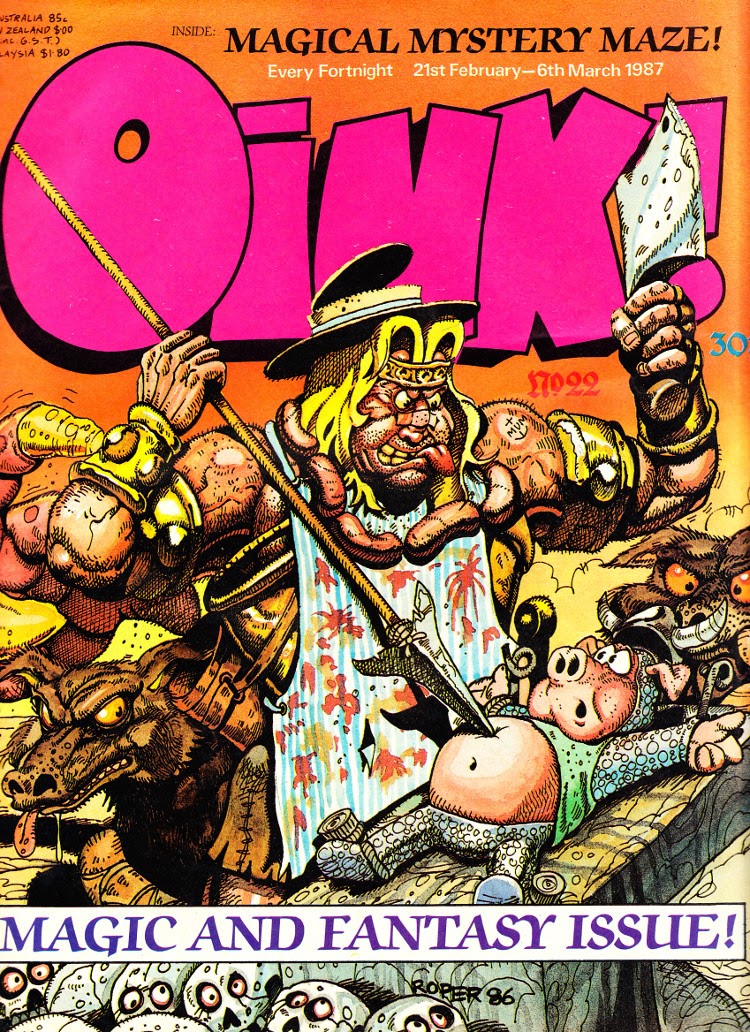 Told you I'd be back real soon!  So yes, after the slushiness of Valentine's it's time for some adventuring, danger, magical heroes and newly discovered Egyptian tombs in back gardens in Timperley.  Never let it be said that Oink!'s themes couldn't be original and there are some far out there versions of our regulars inside this issue, but Andy Roper is the man for the job in our headline strip, The Spectacles of Doom, and since the cover relates (kinda) he also brings us a fantastic wraparound cover poster!  Here's a photo of the whole thing: 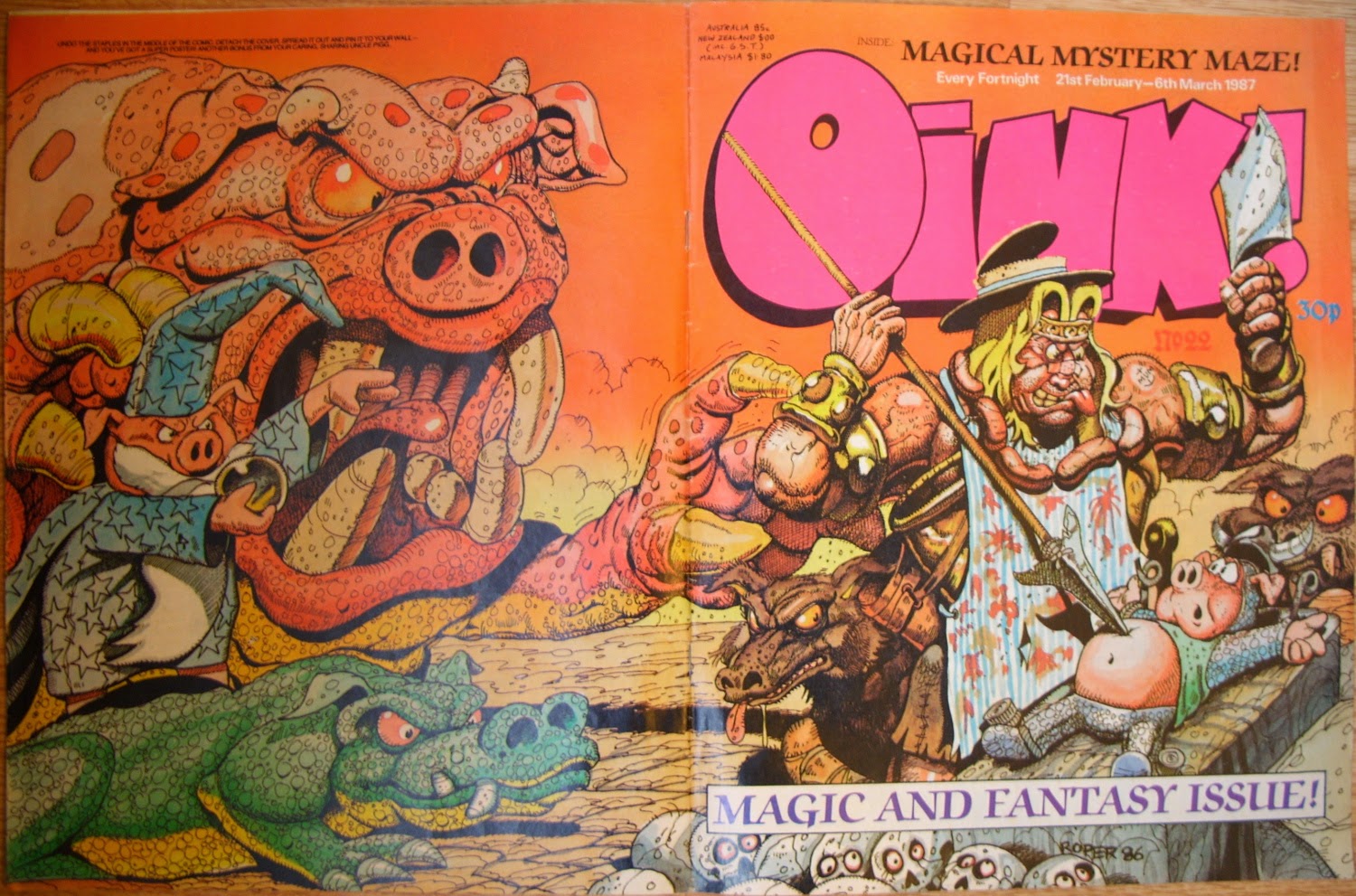 Now I say it "kinda" relates because that's very clearly Prince Endor, the hero of the strip, but why he's about to tuck into some pork belly on the cover when we're cheering him on inside I'm not quite sure!  Okay so he has a butcher's apron and hat on above, so maybe the cover is actually that staple of 80s television, the evil twin.  Yes, that'll do.

On to the strip itself and it's written by Oink! co-creator/co-editor Tony Husband who brings his madcap and seemingly random yet very tight scripting and when backed up with Andy's artwork it really is something special.  I can remember this from my childhood, which says a lot, so in these days of huge fantasy movies here's a proper epic journey.  Just condensed into four pages: 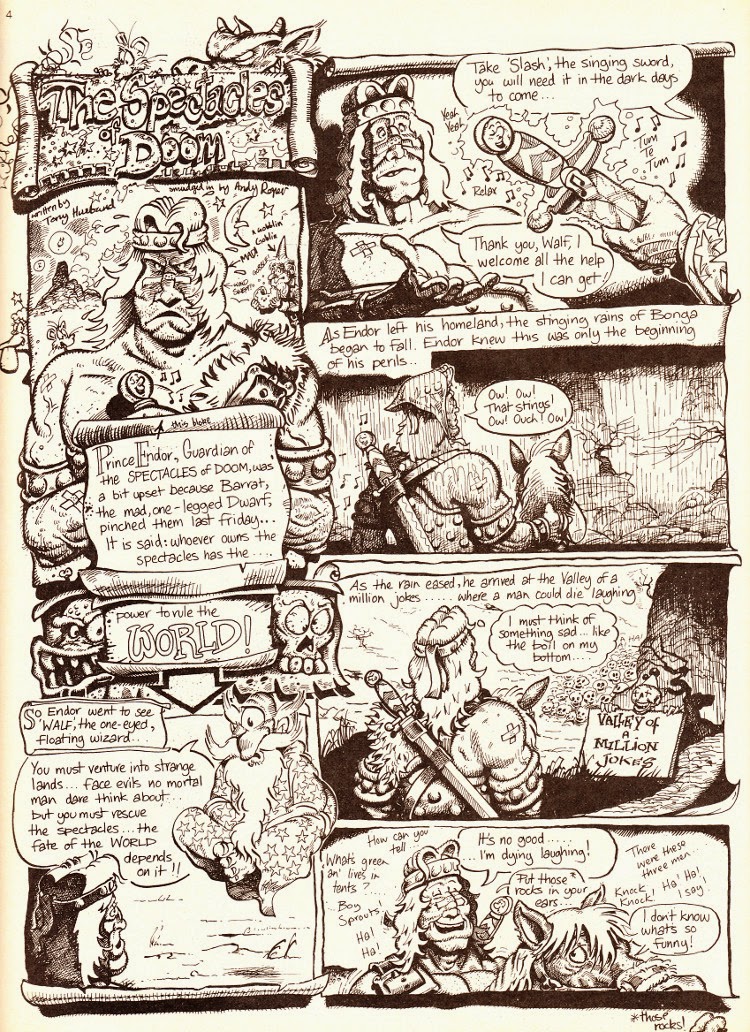 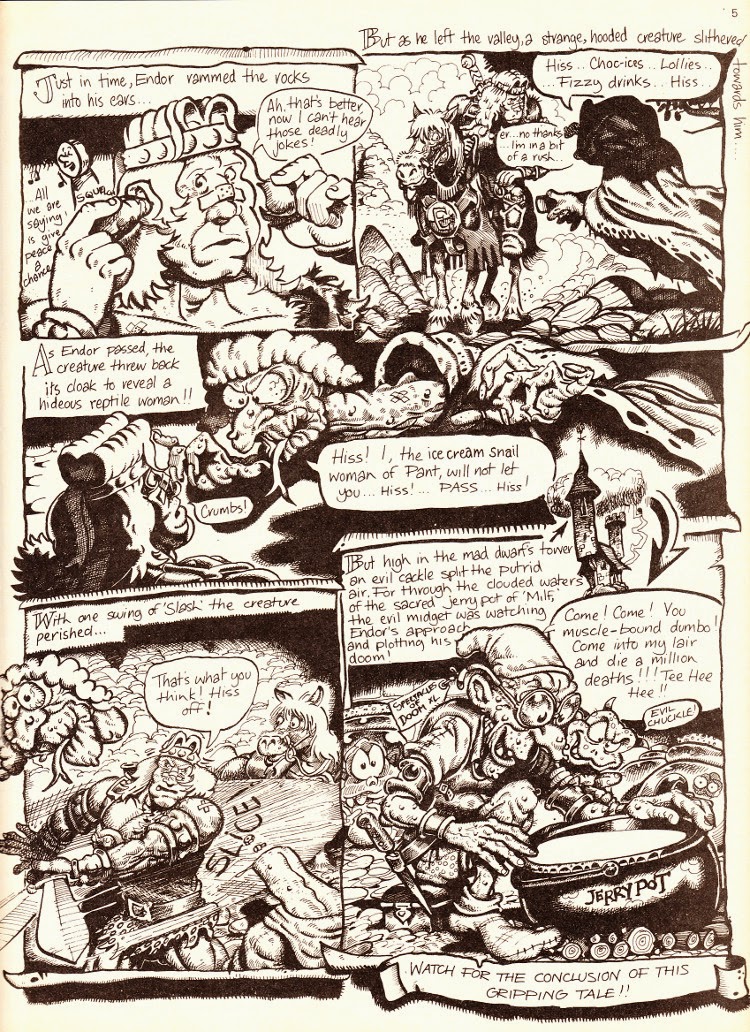 Yes, the remaining two pages aren't in this issue at all but waiting for you in #23.  Now aren't you glad I'm running behind so you've only a few days to wait instead of a full fortnight?

But in my eagerness I've jumped ahead and bypassed our favourite hero, though he's not doing himself any favours in this getup: 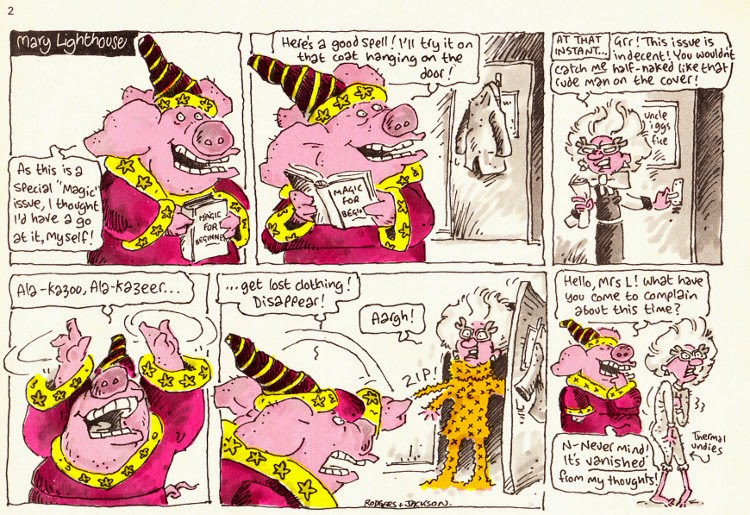 By this stage the Grunts page (Oink!'s answer to the usual comics letters pages) was taking up page 2 quite regularly but here Uncle Pigg and Mary Lighthouse are back to introduce us to the theme courtesy of the ever-present duo of writer and Oink! creator/editor Mark Rodgers and fun artist Ian Jackson.

Now, someone we haven't seen in a while on here is Weedy Willy.  Always drawn in that unique style of Mike Green's which just added even more frailty to the whole strip, a world which suited the character perfectly.  He was written by different writers, upon occasion so far Graham Exton and Mark Rodgers have both propped up our Willy and the latter does so this time too: 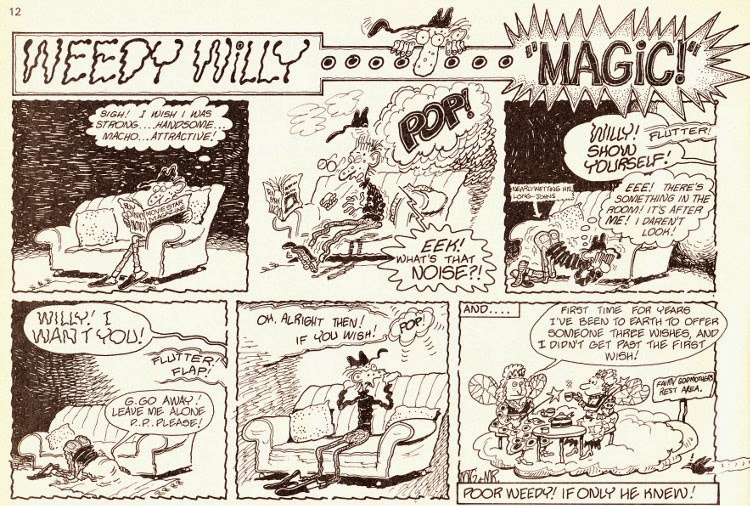 It's actually been a while since he's had a full page to himself, maybe he can't cope with the stress and this time the rest of the page is filled up with a couple of adverts for stamp collecting and practical jokes (you remember those ads).  Right beside them, trying to look legitimate but thankfully failing in every way, is the latest offerings from those gangsters at GBH: 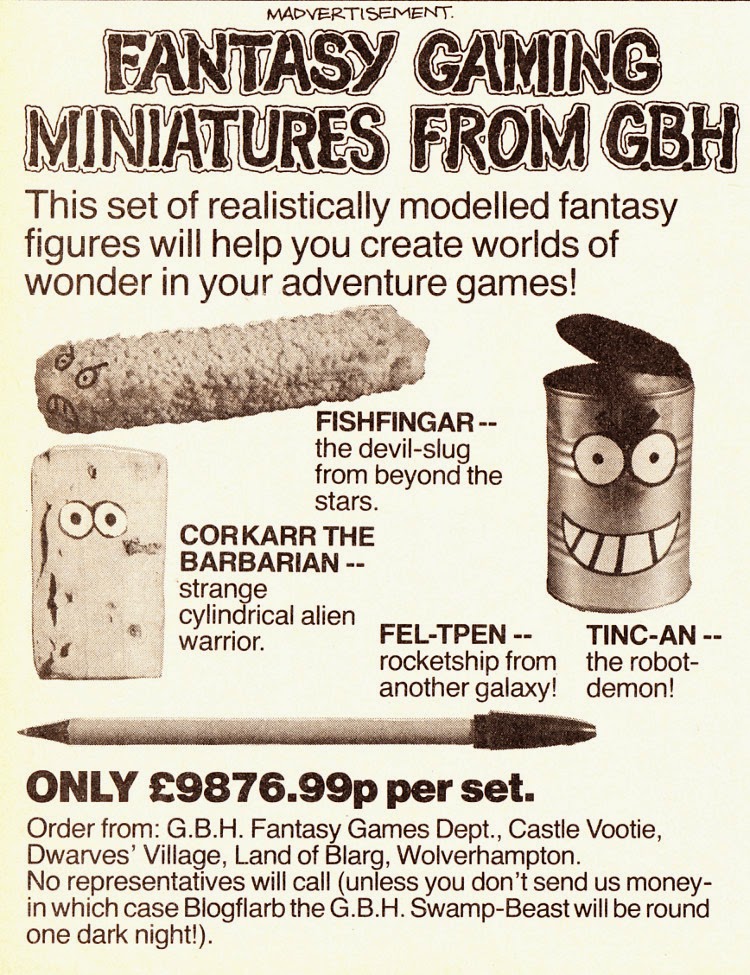 Oh god that tin can.  I can remember that tin can!  It's strange the things that leave a lasting impression on a child and come back later in our lives isn't it?  But yes, Tinc-An I can recall clear as a bell and how I laughed myself silly at the very idea behind it.  I'm sure he popped up later as well in a reprint too, but one thing is for sure it's sometimes the simplest of ideas that work the best!

Now, I've known all along there was probably going to be one character's regular strips which would appear quite frequently, such was the originality of each one and the genius behind every single story.  Mr Big Nose by Banx could easily make it today in any number of publications, but the fact these hilarious snippets into the mind of Banx were in a children's comic made them ever more special.  We lapped his surrealism up and surely a collection of all of his strips could easily be a best seller!  Not that I'm hinting Mr Banx, not at all: 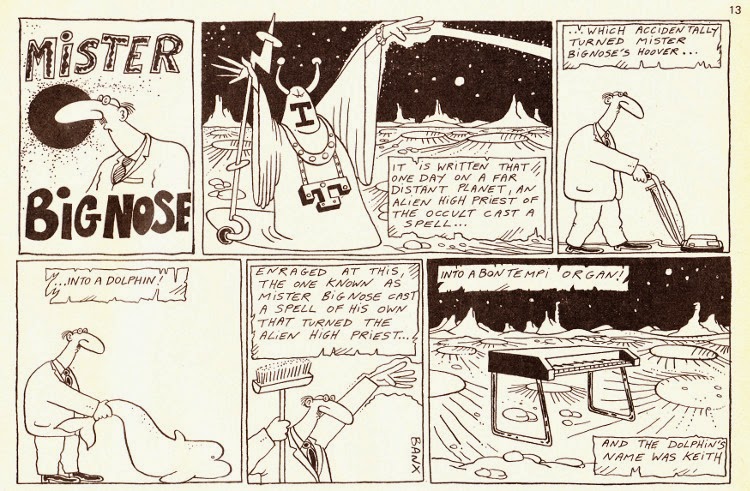 Cracks me up every time that does.  "And the dolphin's name was Keith."

We've already seen Dungeons & Dragons get the Madvertisement treatment (actually the first proper "Madvertisement") way back in #5, but this issue throws up the perfect opportunity to take that a step further.

I remember back at school a few friends playing these fantasy role-playing games in the playground with nothing more than dice and their imagination and all I thought at the time was "how do they know what's meant to happen?" and "what's stopping them from cheating?".  A few years later the board game HeroQuest came along and I saw first-hand how it all worked, albeit with a game board and actual player pieces.  Actually, now that I think about it I remember in the 90s coming up with a game myself which used the Space Crusade board game and pieces and the Barcode Battler!  Remember that thing?  Whoa, sorry, that just came back to me!  See what this blog does to me.

Anyway, Oink! decided to have a little stab at the fantasy role-playing game itself, which keeps in the tradition of certain recent special one-offs in the comic.  You'll see what I mean: 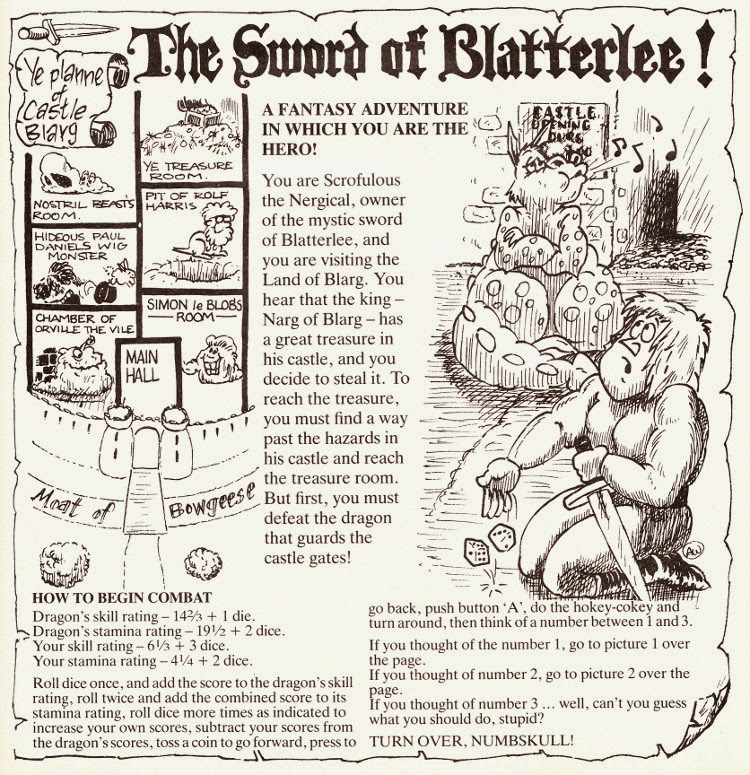 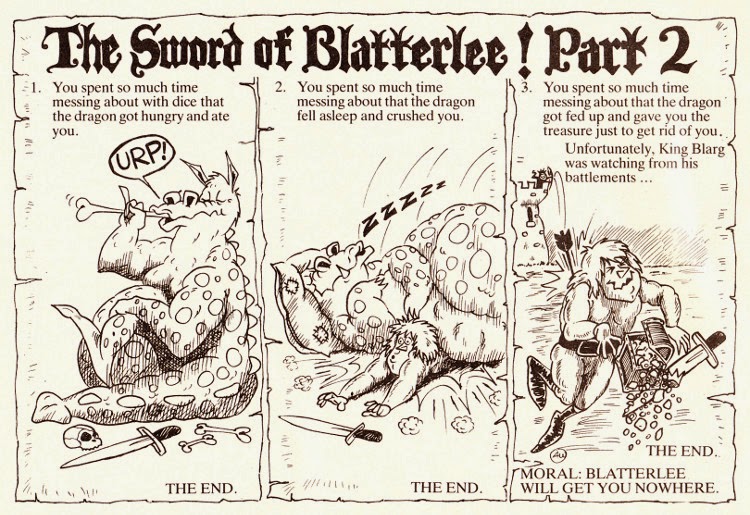 Oh I feel a bit guilty setting you up for that pun.  But not enough to promise it'll never happen again mind you.  Oh come on, the Oink! pun is always worth it.

A double dose of Haldane now and before his own one-off for this fantasy theme let's take our fourth (so far) blog trip to Zootown shall we?:

Classic stuff, but now a special feature from the same creative hand, uniquely shaded and quite relevant even today given the backlash against certain companies and individuals the last couple of years.  Before your very eyes Conan the Barbarian has instead become Konan the Accountant: 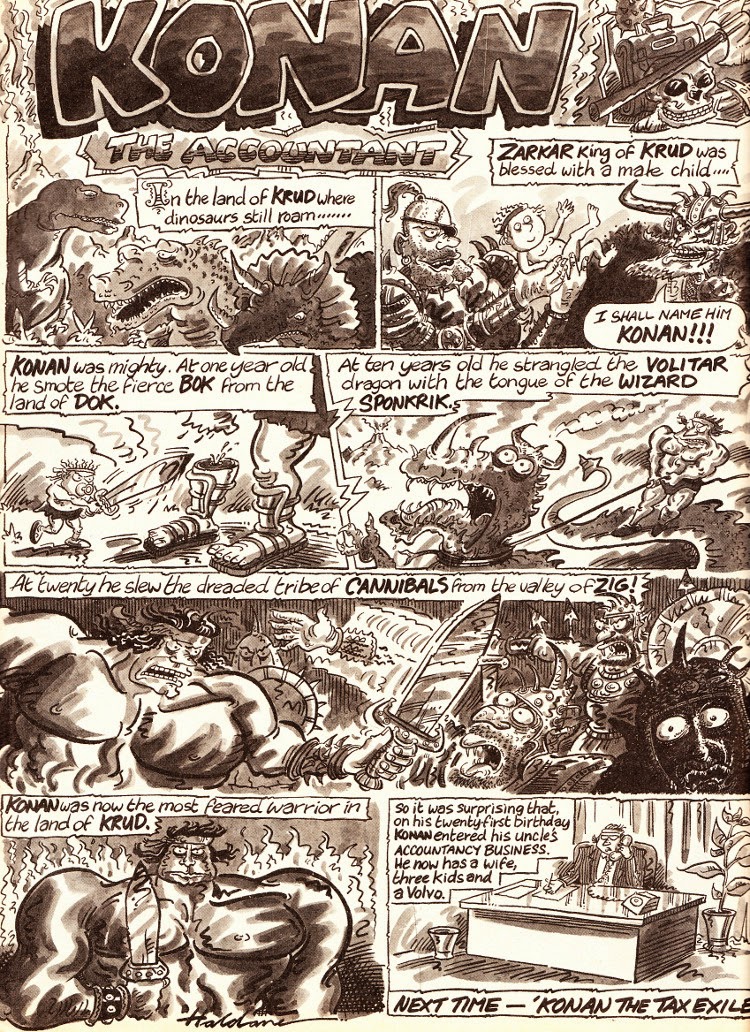 When you line up the Oink! artists, just for some random examples let's say Ian Jackson, Lew Stringer, Banx and Haldane, is it any wonder the comic appealed so much to us?  These are just four examples obviously, but the richness and diversity on show in each and every issue just wasn't something you'd so obviously see in humour comics of the day.  As you'll know if you've been reading from the beginning, or if you know your Oink!, a lot of the artists involved hadn't worked on children's titles before.  Add to that pot the crème-de-la-crème from children's comics and even today these feel fresh, inventive and new.

Got all that from just looking at that Konan page.  Had to gush there for a moment.

Almost done and a lovely treat awaits.  Last Halloween Banx treated me (and yes I'm saying that as it felt like a special treat just for me) to a brilliant strip about a mummy's curse.  As I explained at the time this was a lovely surprise to me as Egypt is an interest of mine, alongside those comedy sharks that keep popping up quite frequently in the pages of these comics.  So you can imagine my delight when none other than Frank Sidebottom appeared at the top of a page wearing an Ancient Egyptian burial mask.  This had to be something good. 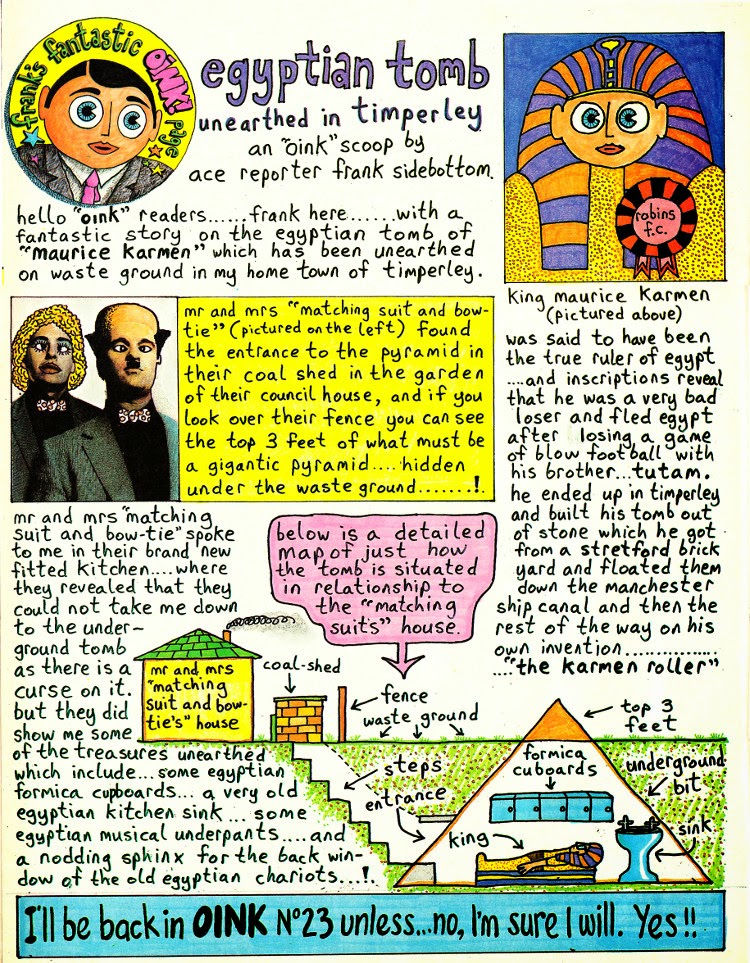 I remember as a kid my friend Roger and I would create little comics for each other, usually riffs on other comics of the day.  For example he created School Busters and WarBots, while I made The Real Smoke Busters and the Battle-Oids.  Yes, original.  We also collaborated with another friend on The Moo!  Wonder where that idea came from.  But anyway, the pages between the strips which would contain fact-files, the intro page etc. were always all lower text, random little columns and drawings, writing squeezed in where it could be, a little bit anarchic.  I can see clearly now where I must've got my inspiration from.  Couldn't have asked for a better role model.

And like Frank I'm sure I'll be back too.  Saturday of this week will see #23 (the "all-electric issue" apparently) as promised and don't forget yesterday saw the first news article for the blog, so if you missed it just click here, but have your £1.49 ready!  Trust me, you won't regret it.

In issue 22 i believe my band was featured in Harry The Head. I was in a band called Thee Primebeats.
Sadly ive lost my copy over the years and would love to see it again if you get chance to scan it in the future

I'll have a look for you and if so I'll get a post up for it, certainly! Always great to hear from those involved in any way at all with the comic! Thanks for getting in touch with the info.

Only had time to have a quick look tonight and it wasn't this issue. Had a look in the two music issues and nothing there either. Definitely a Harry strip yeah? I'll have enough time to have a proper look tomorrow evening for you. :)

Quick update Anonymous, I've checked the first 35 issues and the first special and nothing yet mentioning your band in any strip. I'll keep going......! Once I find it I'll put it up in a post for you.

Thanks Phil sorry its a bit of a pain finding it. My jaded memory tells me we may only appear in a panel or two. Im fairly confident it was a Harry The Head story

Thanks for all your efforts

The Primebeats do indeed make an appearance in #22 - not in "Harry The Head", but in "Horace (ugly face) Watkins"!

Thanks very much Alex, I missed that when checking them! Pete, I'll have the scan up for you this weekend, keep checking the blog :)

We're all very jealous with your moment of Oink! fame!