Hi everyone. It is with equal quantities of excitement and nerves that I can report the first video is up on the blog's brand new Youtube channel. There's three previous videos from when I created it as my own channel because I wanted to put a video in a post or two here on the site, but it's now been rebranded, refreshed and is now officially the Phil's Oink! Blog and Beyond Youtube Channel!
The first video is a quick introduction to Oink! itself and the blog for anyone not familiar with either, and a primer for the channel itself, to fill everyone in on what exactly they can expect in future videos. So what can I bring to the blog through recording myself? Well, you'll find out!
Normally the videos will also be posted here but for the first one I thought I'd keep it on Youtube only as an excuse for you to go and check it out, hopefully subscribe and maybe even click 'like' or leave a wee comment.
To check it out just click on any of these screenshots below and off you pop! Then watch out for new videos either there or here! 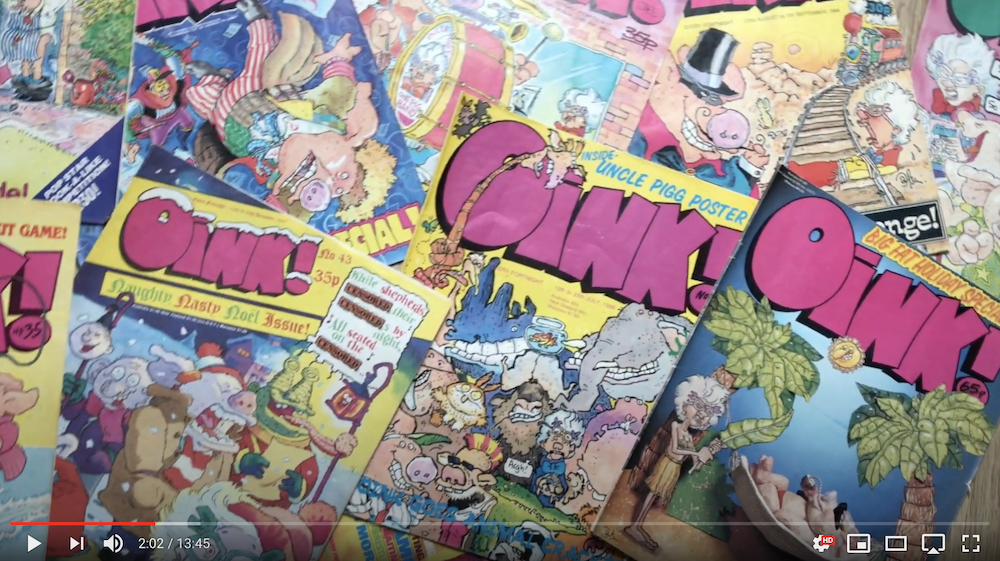 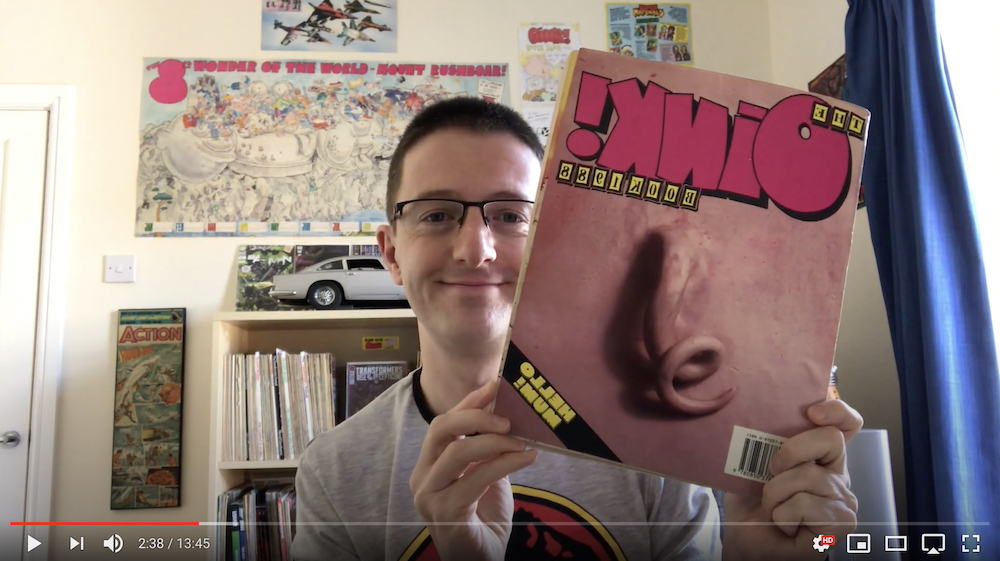 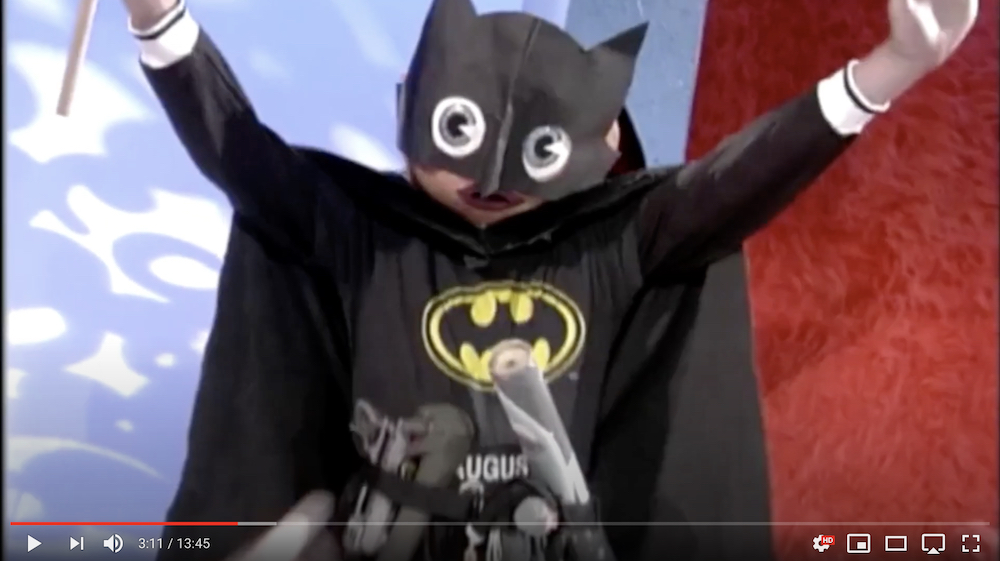 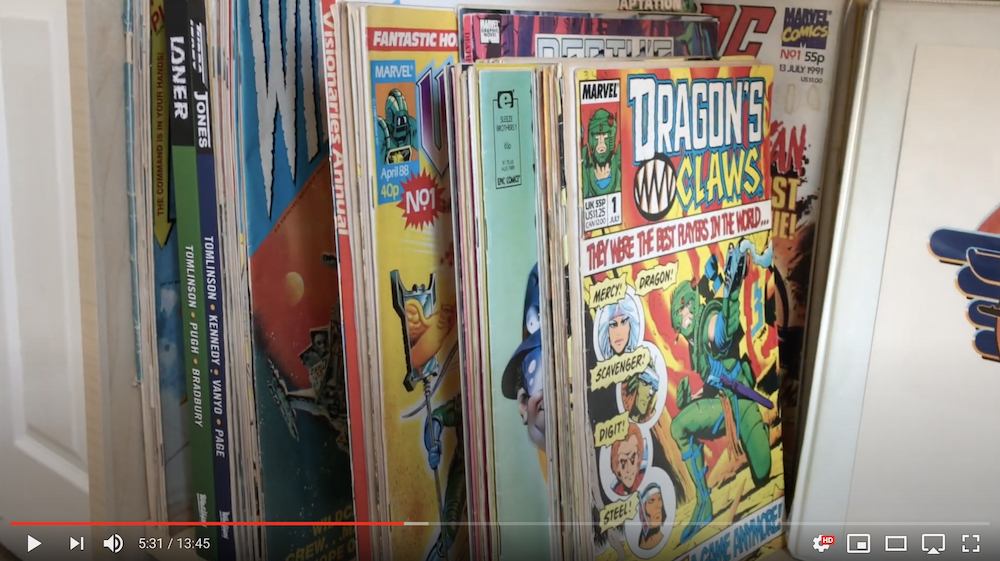 BLOG LOGO - THE THINGS I DO!

Recently I've made a couple of little comments on social media about a new venture I'm going to be undertaking as part of my plans for this site, namely a brand new YouTube channel. I've been feverishly working on ideas, an intro for the videos and in my new house I've set up the second bedroom as a comics room, complete with desk so I can write for longer without breaking my back and to record the videos from, and have organised comics (and posters from those comics) in a not-at-all-obvious background-to-my-videos kind of way.

One thing I knew I'd need was an updated title graphic, the image at the top of this very page. As long-time readers will know there's been a few different iterations since this all began back in 2013 but the most recent one came about after the Enniskillen Comic Fest when Oink! cartoonist Davy Francis drew a caricature of me; it just had to be incorporated! So I decided upon Uncle Pigg and myself either side of a load of my comics and the great big piggy pink logo in the middle. This was about the time I added the "and Beyond" to the name too because the blog was just starting to expand. 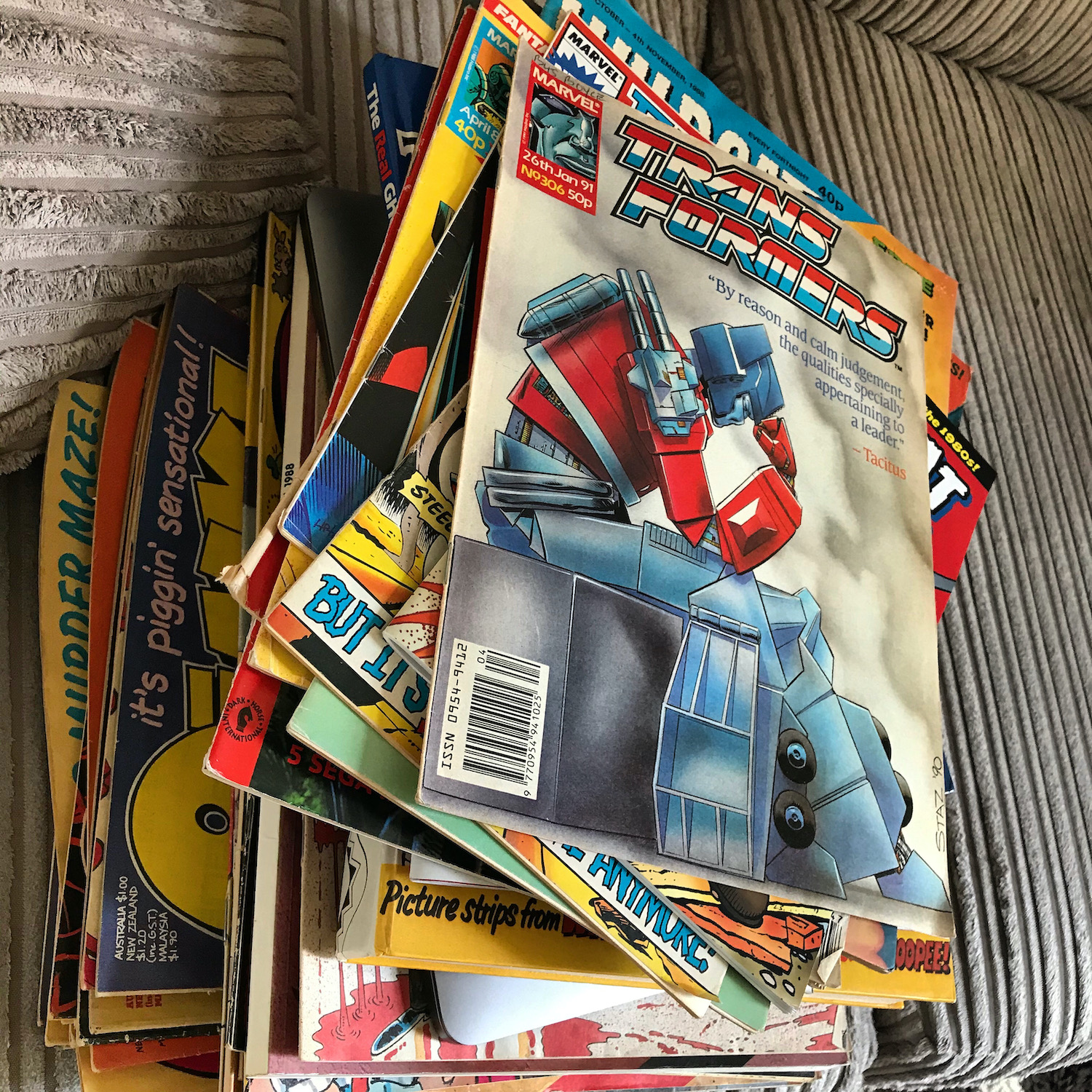 It's a bit out of date now though, the blog has grown and the titles being covered have changed so it's time once again to gather a bunch of them together, throw them on my floor and get the iPhone camera out. You see, like last time I'm not just going to paste together a bunch of covers on an art package, no no no! All those comics you see in black and white in the logo are looking up at you from my living room floor! 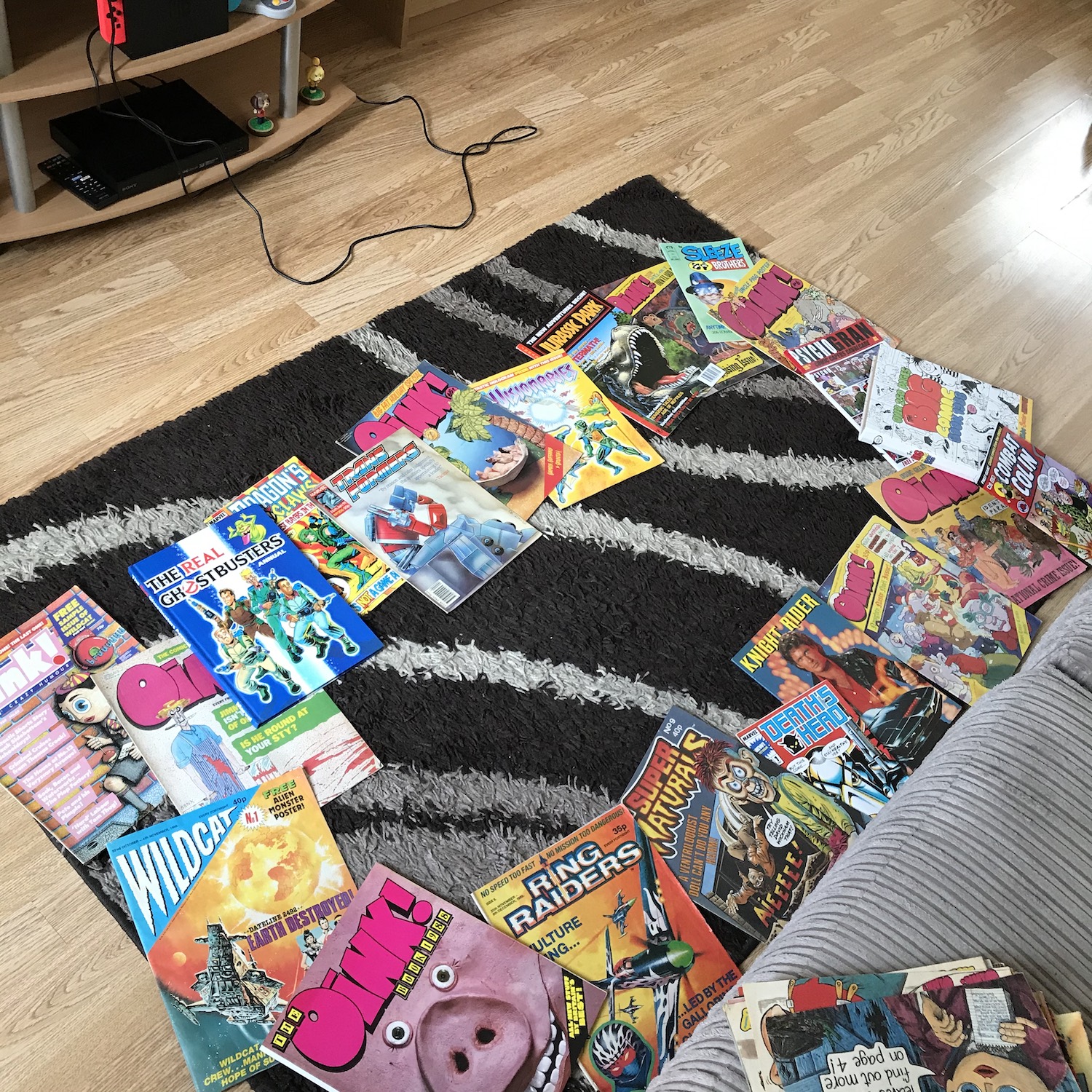 But of course it's not just as simple as chucking them down and snapping away. I have to think about the title of the blog and Patrick Gallagher's brilliant "Oink!" in the middle of it all and in the absence of a huge cardboard cutout of the comic's title this involves a lot of jumping up onto my couch, taking photos, then jumping back down, transferring them to the MacBook and the GIMP art package, seeing where all the issues line up against the blog name and inevitably moving some and repeat, repeat, repeat until they're all in the perfect spot to see them around it. 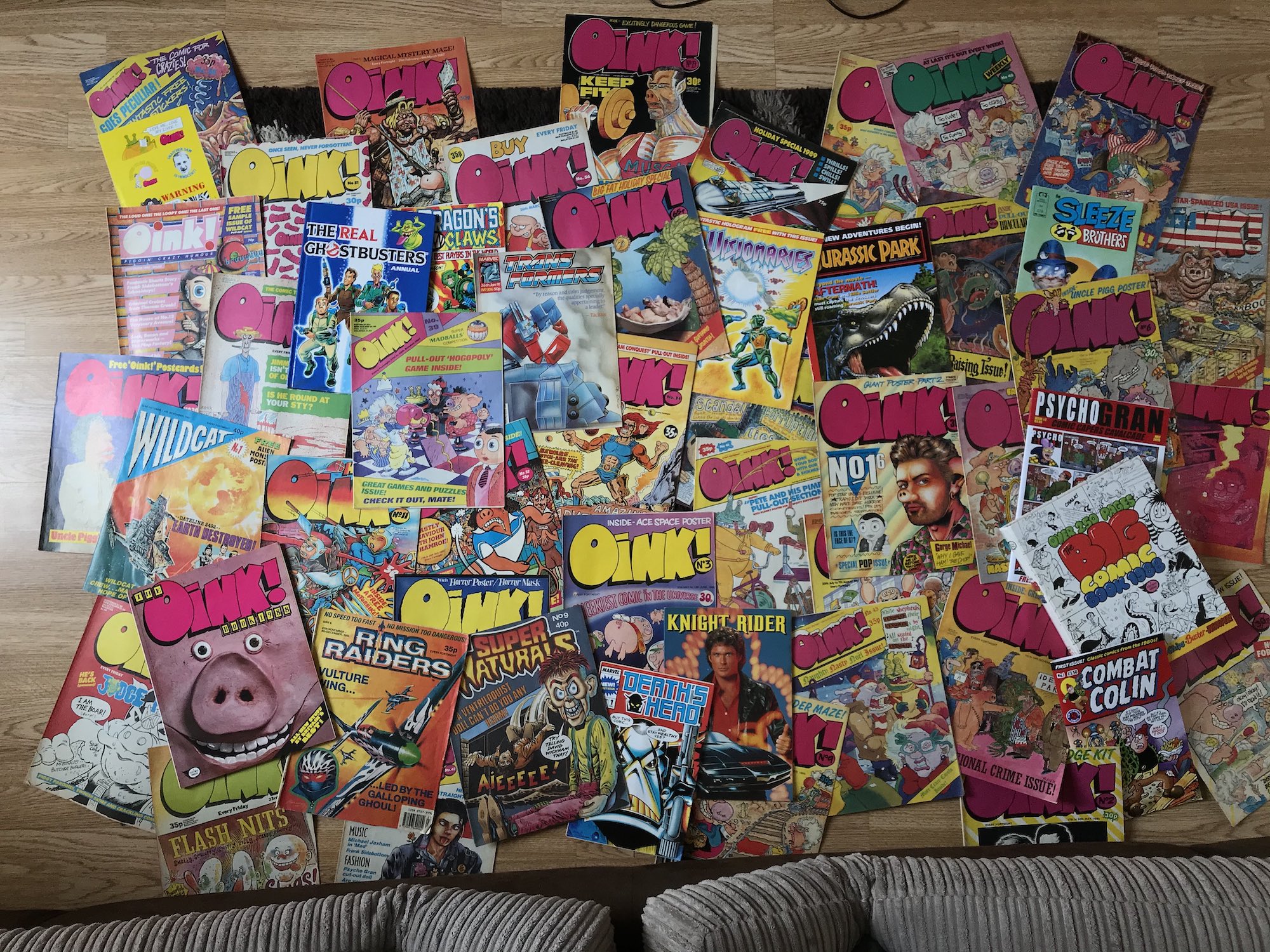 Eventually, all the blank spaces are filled in with lots of other Oink!s (well, it is the main comic here after all), ensuring there's plenty of little images fans will recognise in the little spaces. A few final tweaks here and there to make sure it keeps its Oink!-like random feel to it and it's done. So yes, just like the comic itself, in order to make it feel this random takes a lot of organisation!

The final stage is simply to replace the old photo with the new one on the graphic itself. When I first put this together a few years ago I made it roughly about the size it would display on the blog itself, fitting with Blogger's dimensions. What I should've done of course was make it much bigger so that when it's viewed on bigger screens (such as TVs with this new YouTube channel) it rescales and doesn't look as jaggy and pixelated. But hey, I wasn't to know at the time. I'll eventually get around to correcting that, but for now here's the previous version and below that the one we'll have for the next while.

I don't know how I've managed to get The Oink! Book 1988 and Ring Raiders #6 in exactly the same position as last time! I swear it wasn't copy and pasted, you can see so in the photos!
So there you go, altogether this took about three hours on a very rainy August afternoon but I think it was worth it and, apart from making that larger version sometime, should do for a couple of years just like the last one.
No comments:

To celebrate the release of what I think is a very intriguing trailer for Matt Reeves' upcoming The Batman starring Robert Pattison here's Oink!'s own take on the legend from the very final issue (#68) by Wilkie. If you're interested and haven't seen the trailer yet pop on over to Belfast's Coffee & Heroes' website where you can get caught up right now (scroll to the bottom when you get there). 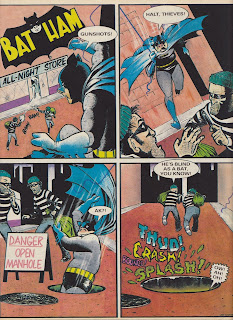